Yar wrote: ↑
1 year ago
Last 1-10 screenshot for now. Will be moving to 10-20 next. Route went perfect, there was some competition (which is expected to be worse at launch ofcourse). But, Classic WoW beta, Tauren druid 1-10 in 1 hour and 48 minutes.

Tried again pushing a little harder, avoiding meaningless deaths, and improved to 1.53 at least, but 1.48 seems out of my league for sure. Didn't get any bag drops this time either so hoping I can burn all the bad luck beforehand and then swim in bags for launch haha..

Making a EU Horde day-raiding guild in Classic! PM if interested or have a look at our forum http://mbh.epizy.com or discord https://discord.gg/7AKguup :)

Did a Dwarf Warrior Run on the last Beta Stress Test, 1-10 in 2h 13min....not the best time, but was crowded.
I will improve it to under 2h in the next stress test.
Video is with german comment.

Driath wrote: ↑
1 year ago
Tried again pushing a little harder, avoiding meaningless deaths, and improved to 1.53 at least, but 1.48 seems out of my league for sure. Didn't get any bag drops this time either so hoping I can burn all the bad luck beforehand and then swim in bags for launch haha..

Warcrazy wrote: ↑
1 year ago
Well since the majority of the 1-20 speedruns listed for the repack are hunter and mage, here is a shaman at 8 hours (8h0m46s). Leveling 1-15 was a breeze, but Shaman is actually somewhat tough from 15-20. Could easily shave off 10-15 minutes without the deaths and moments of indecision. Should be smooth sailing 20-25 with a new weapon and ghost wolf. I'll just link the 15-20 video as I think it's the most interesting, but the rest of the vids are on my channel.


Cool! Been lookin at some of your shaman videos since I will be rolling shaman in Classic.

Hey Shamanigans - I use rockbiter 100% of the time since I am using a 2hander the whole run. I use 2hander only because I earthbind kite, thus making my swings trade 1 for 1 with the mob I'm fighting. However, the fellas on the shaman discord have been doing quite a bit of testing in the beta and have concluded that mob armor values are way different from private servers and that rockbiter isn't going to be the clear victor for 2handers that it was. The consensus is that you'll probably just want to use your highest level enhancement or windfury.

Also, I hear that earthbind kiting is more difficult in beta due to better mob tracking. If that's indeed the case, 1h/shield may be the way to go on Classic launch. If it's a fast 1h, flametongue does pretty well. Otherwise, again just use the highest level enhancement.

Been working hard on my 1-20 route and I am very glad with the result. managed to break 8h which I didn't expect. Feels really smooth so far and very eager to trying it out on the new LH fresh next week to see how it works when you have come competition 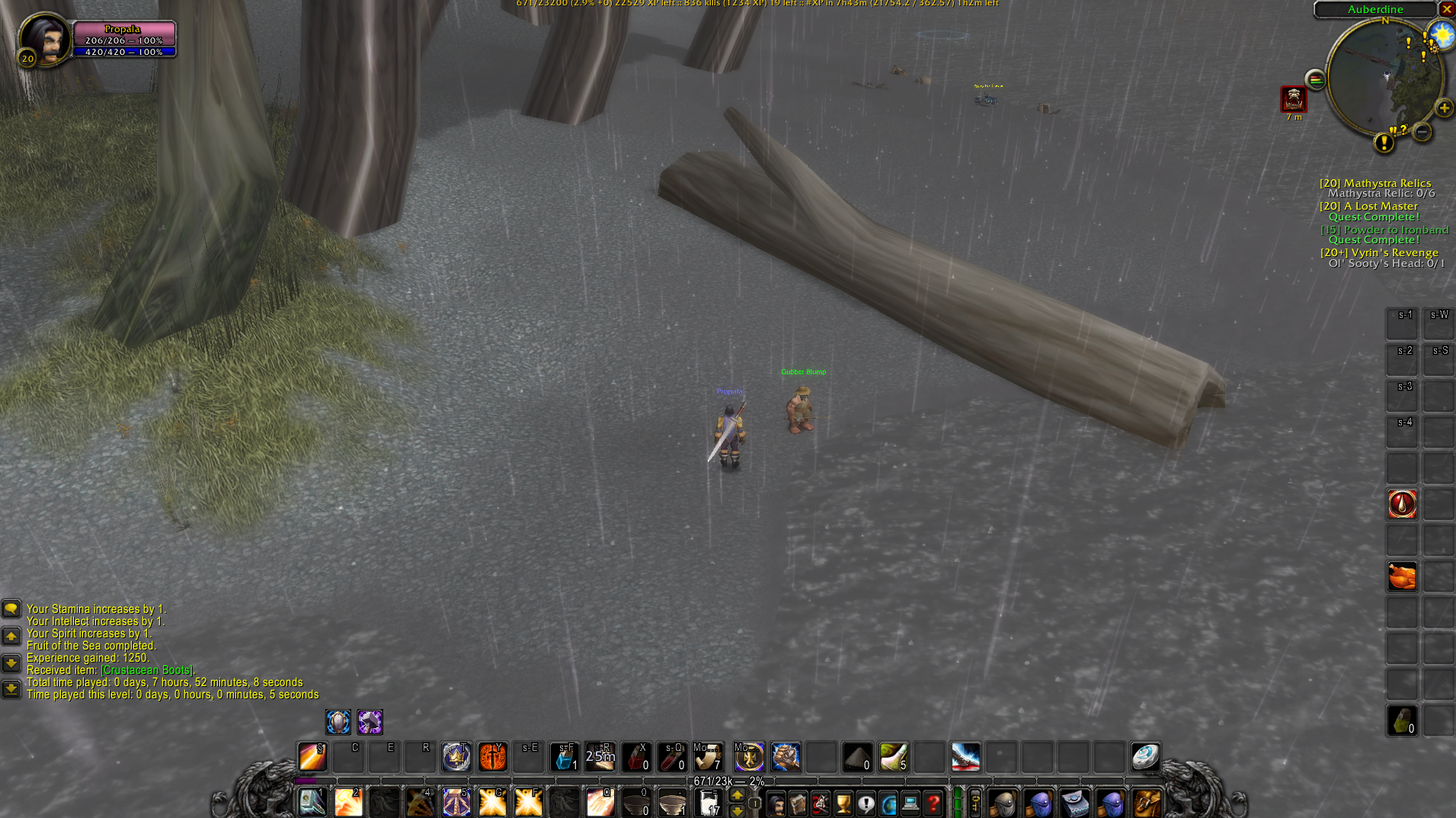 been lurking for a while, wanted to contribute to this great community, NE hunter 1-10 time 1:16:35 on the repack 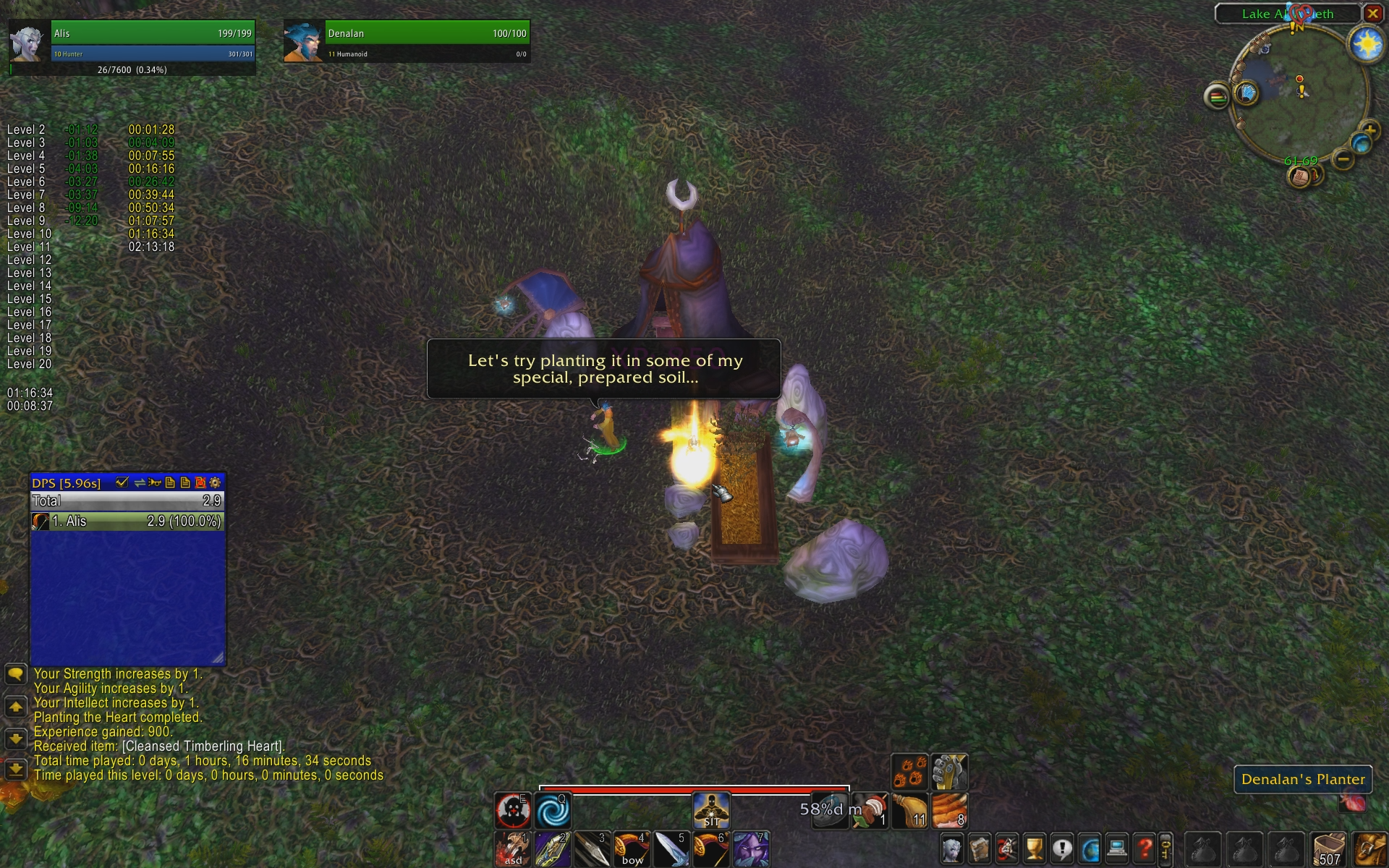 split into 2 vids, Is a route for fast 1-10, with adjustments can be a normal route. If anyone with beta/stress access could test the mob pathing used would help alot!

chazhk wrote: ↑
1 year ago
been lurking for a while, wanted to contribute to this great community, NE hunter 1-10 time 1:16:35 on the repack

split into 2 vids, Is a route for fast 1-10, with adjustments can be a normal route. If anyone with beta/stress access could test the mob pathing used would help alot!

Was a little bored with running several druids from 10-20, that I decided to test my mulgore route on a different class. I honestly believe I can push this run under 1 hour and 25 minutes if I play at full focus and dont suffer from severe lack of rngia (actual disease, look it up

Hehe, not bad. Yea you should be able to do a sub 1:26h run.
Sad thing, you wont be that fast at release :p

Actually all people who train 1-20 train something they cant really predict. You should train 20-60...cause at 20 you will be ahead of the pack (mostly with other fast people)

I guess there is a truth in that. But for example, with the release of MoP all the horde started on the exact same spot. I played the beta and mapped out my entire leveling route which got me ahead of the pack within the first 15 minutes of release. Got realms first as well. Not saying launch won't be slower, but simply knowing where to go and what to do is such an advantage. At this stage I can pretty much dream the 1-10 route, almost that far with my 10-20, after that 20-35 etc etc

Sure, will upload it when I get home from work tonight!

My YouTube with Classic WoW Guides: https://www.youtube.com/c/YarTV
Tactics
US Earthfury 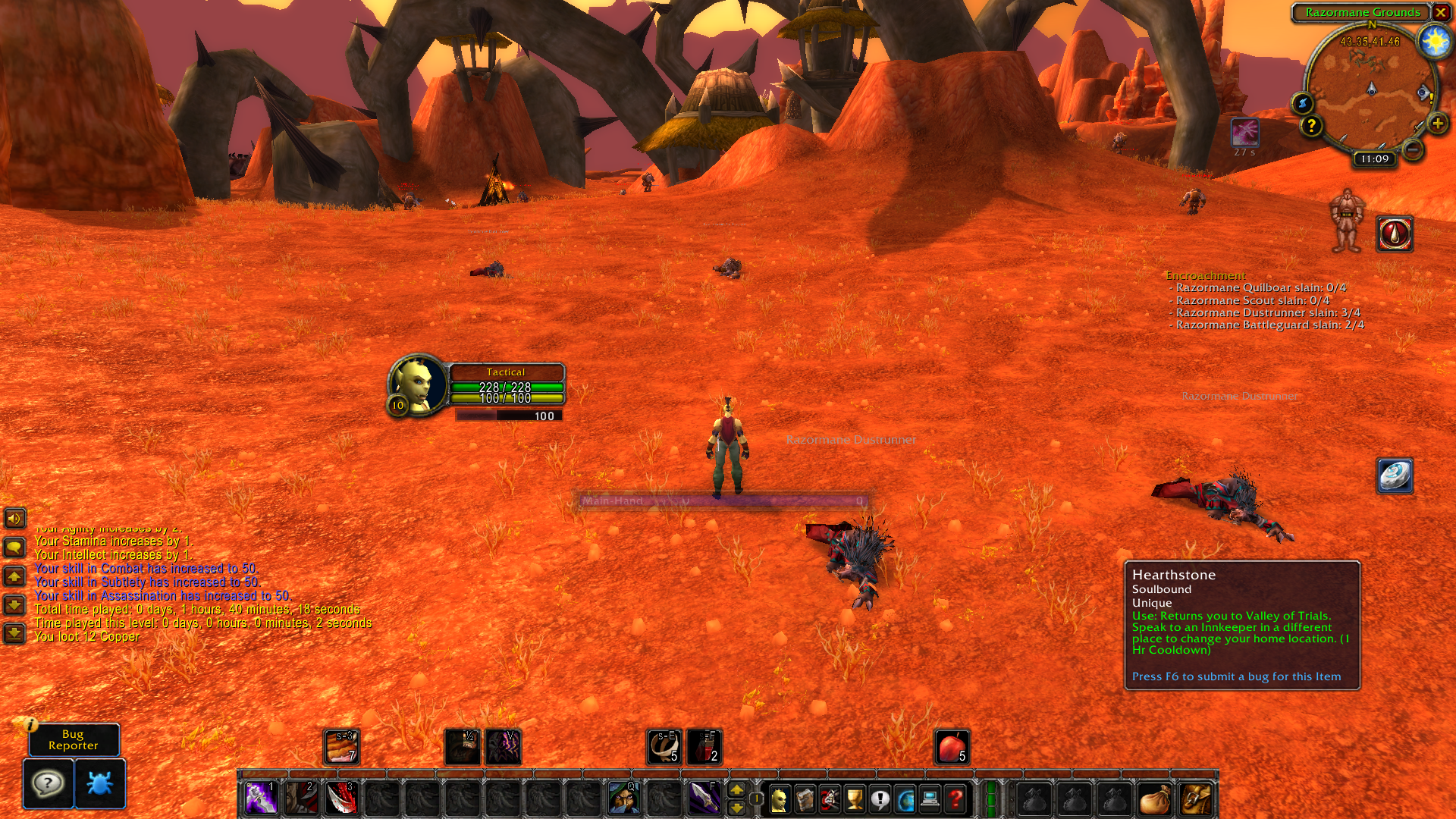 Was my first time using this route for a while, i did a few mistakes tbh, the biggest forgetting to put hearth to razor. Still beat my old record (not counting my 1.35 where i had a dagger drop) I think i should be able to get this down to 1.35-1.36 for sure and 1.26-1.27 if i get a dagger drop on beta.

I didn't record this run but will do a new 1-10 orc rogue where i stream it on twitch & might upload to youtube too :)

Twitch.tv/tactics_lol if u want to see some beta speedrunning

So with no access to beta im stuck practicing on pservers again. My goal is to hopefully be within the top 40 people hitting 60 on my faction, hitting 60 within 6 days of launch.

Completed 2 runs to 30 sofar, with the second run being around 20h 40min - pretty meh but if I can post that time come launch I wont be complaining.
On my third run I managed to beat my PB to 20 by around 20 mins, at 8 hours 25mins. Going to take this through to 30 again and hopefully be under that 20 hour mark. After that im gonna start taking all three through the 30-40. 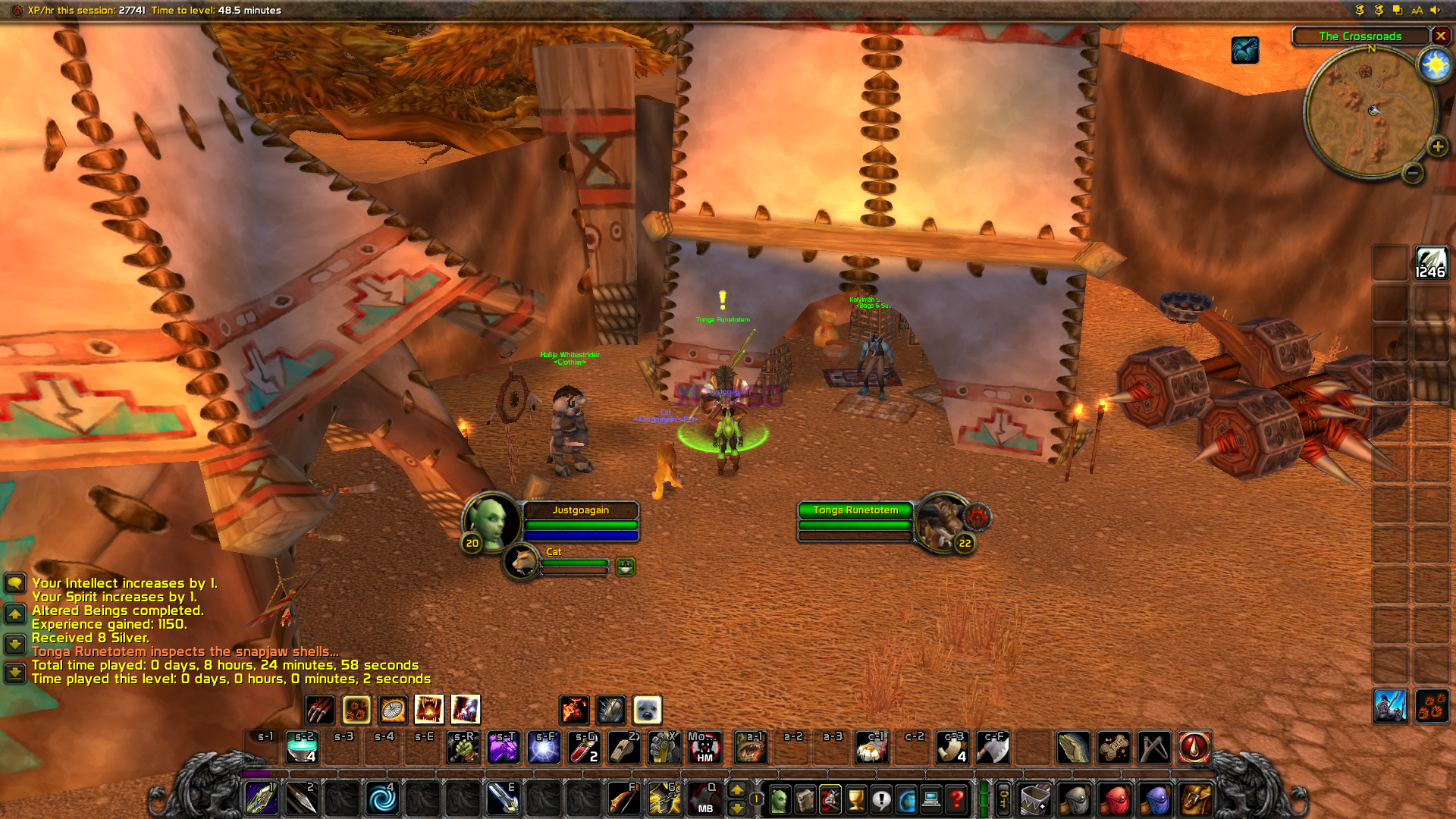 All these runs are impressive, even though I prefer to slowroll. Could be useful for an alt perhaps.

beside the 2h weapon from the quest, u can get some nice other armor pieces too...

what do u guys think? is it worth it?

towely wrote: ↑
1 year ago
what do u guys think? is it worth it?

It's a thing I have been thinking about myself. It could be worth it as long as the 4 other people in your group are on the same level with you when it comes to mindset. If the 4 other guys just want to take it slow and have fun, your goal in going as fast wont be achieved. If you can find 4 likeminded people, then I guess it could be worth doing!
Yar, main druid!

Depending on population of the area I've been able to get 30k/hr consistently through these levels just by grinding in one spot. I am also pretty sure the mobs have fucked armor on pservers and wont be like that on classic, but i think it would still be like 22-25k/hr though.
Tactics
US Earthfury 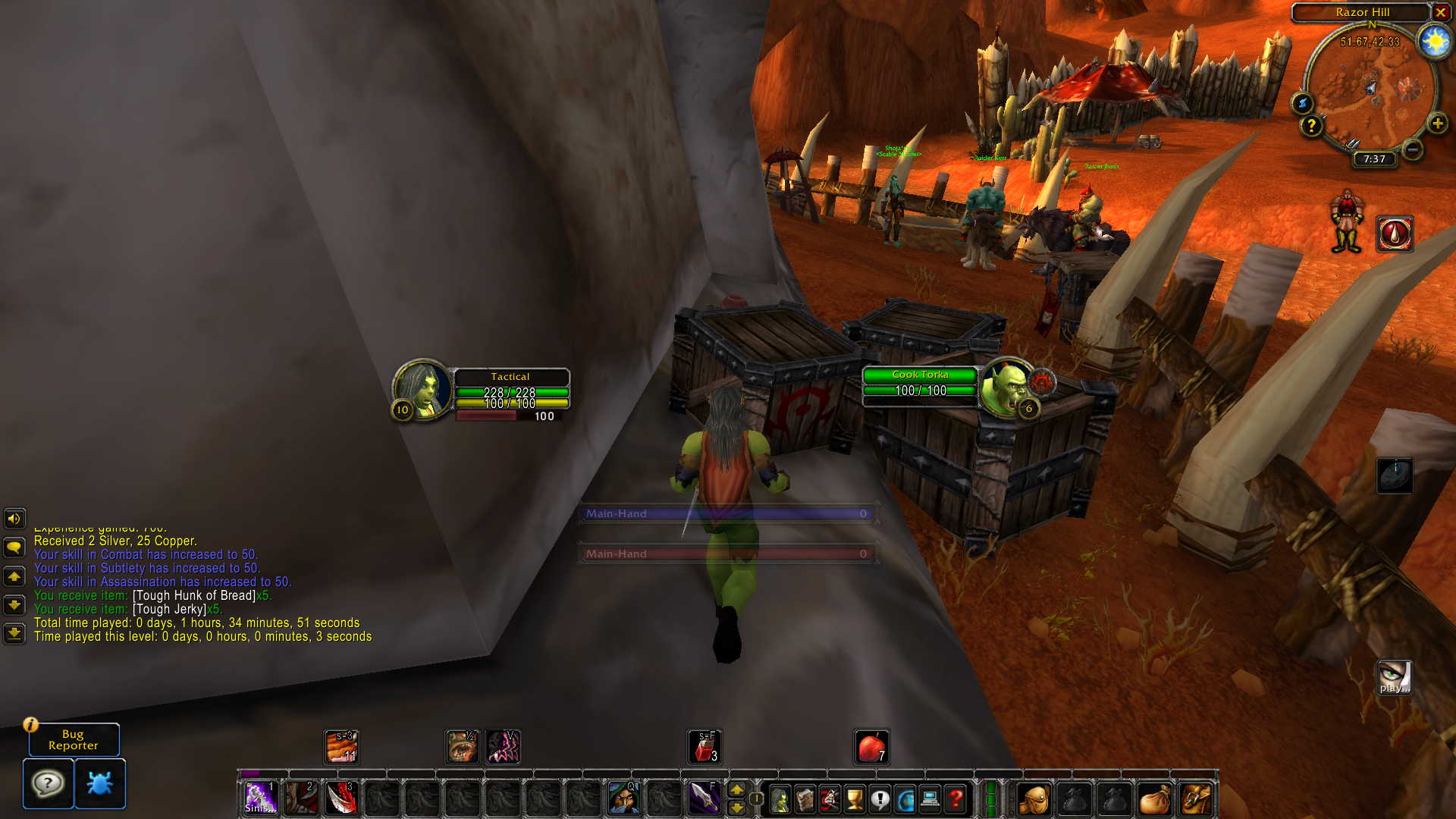 Honestly one of my best runs so far, seems like early levels are quite a bit faster then private servers (5 mins or so) the reason to me seems to be because mobs deals way less damage. In starting zone i eat 0 times & later on i barely need to eat either (on private i bought level 5 food for less downtime, here i didn't even buy any food or level first aid, the food u get from quests & mobs seems to be enough.