Only had the Duskbat Pelt quest to go, needed only 4 of them at 1h27min20sec and I killed like 16-20 bats to get that (1h34min20sec) at this point and about 150 xp away from not needing this quest at all. As you can see I even have another quest to hand in when I dinged 10.

Overall still happy with my run and I assume the better mana drinks > better dagger for sure. 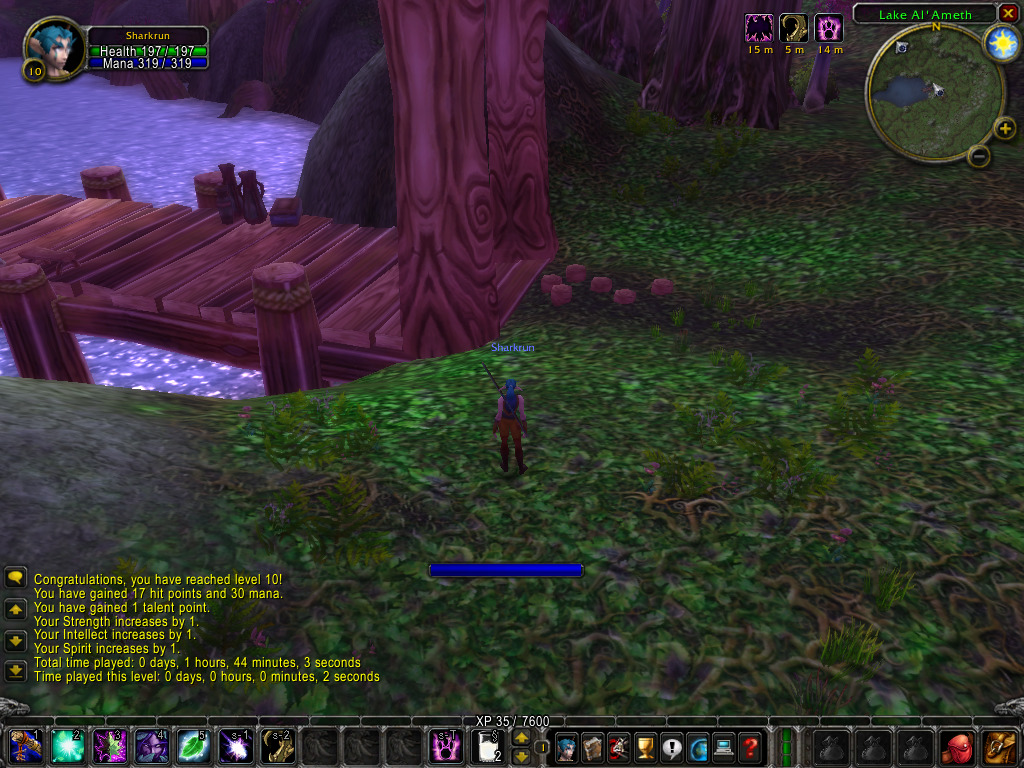 @Grav Well done on the maps man! There was someone who was asking for something like this a while back.

Level 40 aquired. 1d19h. My goal was below 1d20h. Still I feel like things are starting to slow down significantly, and my route is far from perfect in this level range since I havent practiced much, my route is more or less theorycrafted out of the game, so sometimes I follow my notes and then Im like "oh Im 50% behind what I though I would be...."
Will upload 30-40 on youtube in the coming days 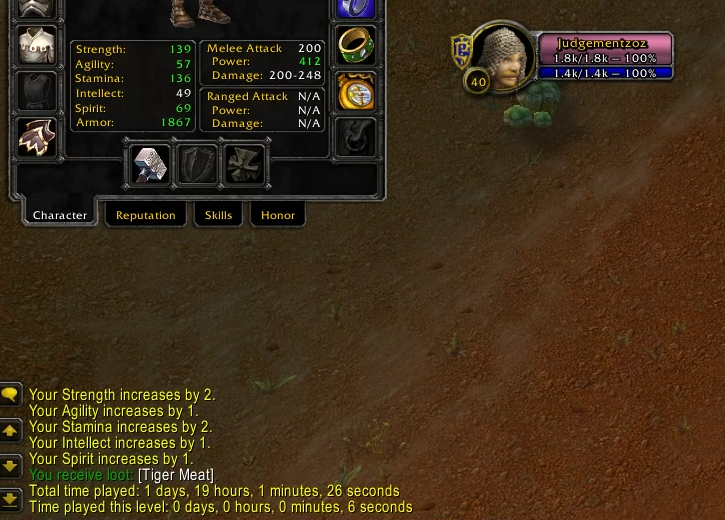 @Jpy might be an idea to ditch the character name column and swap it for a race column. Will be easier to keep updated but requires the one time effort ye :p Maybe just do it for every new time and leave the others blank.

@Judgement awesome stuff man, do you plan to push all the way to 60?

@Xinergy you’re actually right, the name column is pointless as hell in hindsight..

Jpy wrote: ↑
1 year ago
@Judgement awesome stuff man, do you plan to push all the way to 60?

@Xinergy you’re actually right, the name column is pointless as hell in hindsight..

hey does anyone have good resources to play a route out, like a program to right it all down on that can include pictures? anyone know of a good website to get map pictures from i can draw on ect?

Judgement wrote: ↑
1 year ago
Level 40 aquired. 1d19h. My goal was below 1d20h. Still I feel like things are starting to slow down significantly, and my route is far from perfect in this level range since I havent practiced much, my route is more or less theorycrafted out of the game, so sometimes I follow my notes and then Im like "oh Im 50% behind what I though I would be...."
Will upload 30-40 on youtube in the coming days

Awesome! And I love the videos BTW. Was on a 10hr flight and watched your 1-20 :) I took notes and worked in some things into my leveling route.

@Tactics man, that’s harsh LOL. At least your being consistent and it’s a great time for 20 on Rogue.

Tactics wrote: ↑
1 year ago
Was gonna break my record while streaming the whole run (usally im slower when i stream cause i read chat and such)

Warcrazy wrote: ↑
1 year ago
It's not much, but I shaved about 36 seconds off of my warrior run. 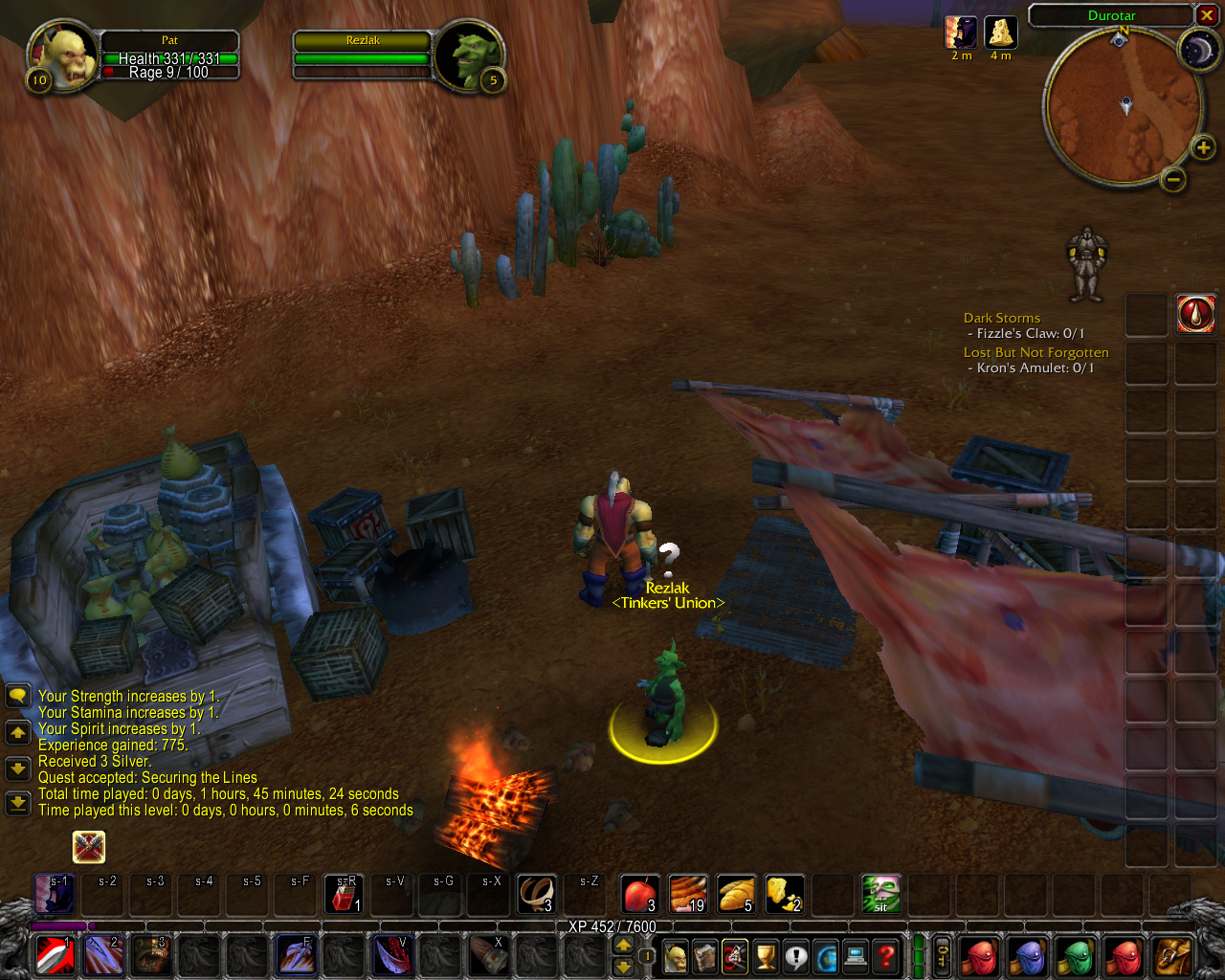 Do you know a guide for Alliance warrior?

Sorry I don't. I only know Orc.

Just found this website/speed run thread and am super excited. I did a practice run to 30 awhile ago and these were my results:

I think I can shave about 2 hours off. Wasted a lot of time in 1K Needles dying due to underestimation of the difficulty soloing the Grim Totem guys with shit gear. Also travel time to Hillsbrad. Come to think of it there were a lot of things I learned from this run. Hoping for a beta so I can get a good feel of what Classic will really be like since we don't know for sure the accuracy of private servers.

Tactics wrote: ↑
1 year ago
Was gonna break my record while streaming the whole run (usally im slower when i stream cause i read chat and such)

Yeah it is very brutal :( Worst is that it's "1%" and bassicly i calculated out the damage and it's 5 or less hp left for sure (12 damage at 2% & total hp is 826 so it 4 or 5 hp) I missed offhand (does 5 to 6) & evis (would have been overkill)& my thorn debuff (6 or 7 dmg) at the end. Just one of them hitting and it would have died. In hindsight i should have kited it better when i gouged and used throwns etc. But i thought i would get it + i wanted to burst to make sure i get new PB.

Atleast i know i can get it down to 8.30 now (i did some mistakes this run, 1 unintentional death & 1 time where i didnt accept quest which lost me 3 mins cause i had to run back)

@thebigripper Thanks for sharing. Unfortunately, like with dual box runs, we don’t currently have a leaderboard for Kronos 3 and to be perfectly honest I know nothing about that server so I’m not sure what differences there are (if there are any). If more people show interest in posting times for Kronos 3 runs I can add a leaderboard for that server as well but for now you can feel free to share your runs etc.

I’ve been reading through a lot of posts and watching vids. A lot of good stuff.

I just can’t help but notice how different mobs behave on some servers. I didn’t get a chance to play the classic beta during blizzcon but I can already see some major differences in mob behavior across various private servers. (Mob armor is also off) For example I know that on Kronos the vile familiars in Durotar stand still and keep casting fireballs which ends up doing a lot more damage. The durotar tigers also don’t drop furs very often. In some videos I watched it looks like they were 100% drop chance. In my experience I’ve had to kill 3-4 tigers just to get 1.
Did anyone try speed running their route during the classic beta? I’d really like to see the difference in time.

Classic beta was only lvl 15-20, couldn't do any route running.

I'm wondering if someone could host a speedrun server where we can play together on the same fresh server. I think it would be a lot of fun to compete against each other for level 10 or 20 or so. You could also test your route with some competition. Is there enough interest for this?

Really love those speedruns. Hope with the release of Classic we will see a lot more of them

If we do get a classic beta before launch I hope it's something like 1-30. It would be enough to try out some different routes and not spoil all the fun for people who haven't played before

I'd love to get it down to 8 hours but I'll probably practice 20-30 for now and do another attempt later. I should note that this is with fire spec, feeling like it's more fluent with Darkshore routing, but it might need further testing.

Also good job everyone! Some impressive times out there. 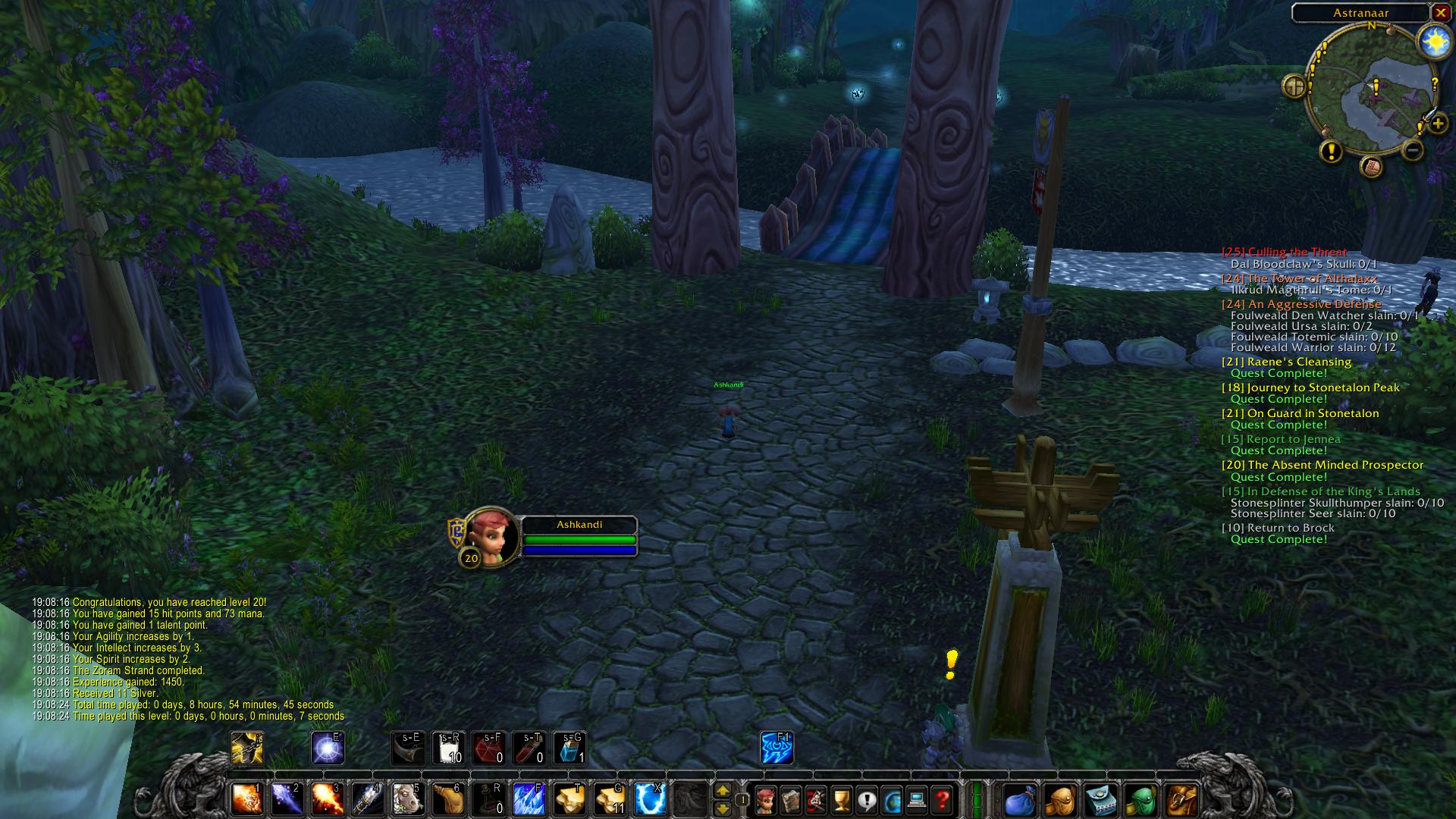 Hey man I was wondering how you handle the routing especially for Darkshore and post Darkshore. Originally I was following Xrewz video guides for mages up to around level 15 but his darkshore route felt kinda interuppted since it didn't continue to 16 so I eventually ended up trying to look up other stuff. Found out that Judgement had a lot of good videos so atm i'm trying to follow his stuff a bit even though its from paladin perspective https://www.youtube.com/channel/UCjk6L4 ... BAA/videos

I generally arrive at Darkshore at around 3 hours played I think my best was 2hours 54minutes and Judgement finishes Darkshore at 16.5 in roughly 5 hours flat.. I guess my goal is to try and get sub 5 hours 30 minutes but i'm really struggling with choosing a route for it.. I do REALLY like the idea of trying out fire specc till 20 ish and then respeccing so I think i'm going to try that.

Sorry i'm rambling but I guess TL;DR is do you use your own route for Darkshore or do you use Xrewz video and if so how do you continue where his mage videos left off

Hey man! I use Xrewz' route for 1-12, after that I actually use @Alenya 's guide for Darkshore - Patreon.com/theraceto60 , it costs 5 dollars though. But to be honest, Darkshore routing is pretty simple - you do 3 major runs from Auberdine, first 2 up north, then 1 south. I really like fire because you can stay Darkshore 12-18 uninterrupted and dont have to go to IF for frostbolt at 14. I still have to optimize the route after 18 - Alenya stays at Darkshore untill 20 but I dont like it that much, might be faster to go Redridge straight at 18 for mage.
Cryphis
Posts:
Likes: 0


A user of this forum told me in my stream that it is okay to also drop the link of my stream and my route here.
If this is against the rules of this forum please delete the 2 links, I will notice this and won't post links which are not directed to the run related anymore

@Massivechonk nice time!
Also, Cryphis (can’t @ you yet, sorry lol), sharing your twitch is fine by me and nice time!