Stfuppercut wrote: ↑
1 year ago
Got to say... For only a month into Classic and seeing a binding and now an eye we've either been on a lucky streak (probable) or Classic drop rates are higher than private.

I’m sure you probably meant the drop rates for those specifically but this reminds me of something I’ve experienced a lot of so far in classic— no drops. Things that were pretty damn efficient gold targets in the 30-40 range (Swamp Jaguars etc and beasts in general) are pretty lack luster thanks to seemingly 1/2 drops having absolutely nothing.

frozenmerlin wrote: ↑
1 year ago
2 Edgemaster's in as many days and a Cassandra's Grace

what nasty ass shit did you have to do to have this level of luck?! Hahahha

Pippina wrote: ↑
1 year ago
Like last night when I camped every horde player that tried to gank me along the coasts of STV. I'm finding that water form is my get away from horde button. A bunch of times I'd be minding my own business and some warrior would charge up and try to gank, I'd jump into the ocean and swim away. Then I'd pop stealth and track straight back and attack as soon as they'd engage a mob and be at half health. The great thing about stealth is that since I can target them, I can let them know that I'm breathing down their back as often as I want. Lots of /taunt spam followed by attacking them from behind every time the guy's health got low. I think I was averaging like a 5:1 kill to death ratio and I didn't start any of it, lol.

Hahah, you're my Alliance doppelganger! I spent some of last night along the coast of STV - including soloing the elite crocolisks for the quest. While I was in bear form dragging/killing the croc back toward Grom'gol for safety, a paladin tried to jump me. I was quite close to town at this point so I just shuffled back and the guards finished off the last 10% of the croc and proceeded to chase the paladin off into the water.

Then, I jumped into the water, aquatic form swam nice and deep so he couldn't see/notice me and followed him right out to the island with the elementals. He started a fight with an elemental, so I jumped him and killed him then finished his mob off as payback. He spirit rezzed. Druid is so damn mobile it's great for world PvP. We certainly will have trouble with warlocks and probably good shadow priests, but we can definitely hold our own against most classes if we utilise our forms correctly. It's definitely been great fun, got to 39 last night and I am about to head to badlands/dustwallow marsh to start those areas before returning to STV for the higher stuff.

Damn you guys are inspiring me to level a druid again.

It's pretty great because of the escape power that we have. Combine our power to get away with our stealth and bursty DPS coming out of stealth and we have natural cheap shot camping built right into the class. Everybody says that druids are good at a bunch of stuff, but not the best at anything. I think I found the exception - we're the best at avoiding ganks and then retaliating by popping out of stealth behind the guy tried to gank 5 minutes ago while he's at 25% fighting a couple of mobs

And finally, the day has come. 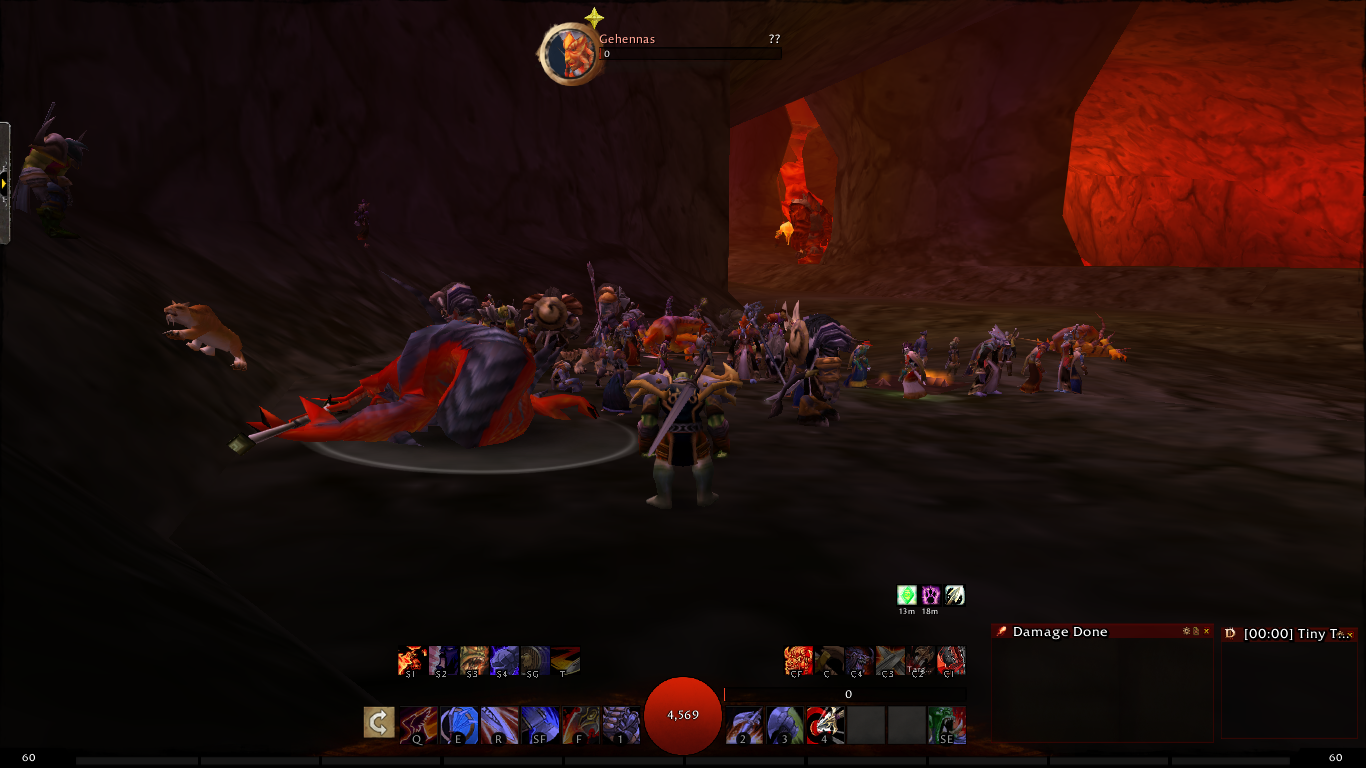 https://classic.wowhead.com/item=9418/stoneslayer carry me all the way to MC lol

Made it to the mid 40s on my Human Warrior. Then I woke up one day and felt a weird urge to try a Horde character, as I have always played Alliance even back in 2005.

Level 30 now on my Troll Priest and I am totally hooked. A little bit of a setback on the road to hitting 60, but Classic is all about enjoying the journey so I am not upset about it. :)

Brevanik wrote: ↑
1 year ago
Made it to the mid 40s on my Human Warrior. Then I woke up one day and felt a weird urge to try a Horde character, as I have always played Alliance even back in 2005.

Level 30 now on my Troll Priest and I am totally hooked. A little bit of a setback on the road to hitting 60, but Classic is all about enjoying the journey so I am not upset about it. :)

But you're on the right side now so there is that.

No prebis. Ive got brokentooth. Im a shitter.

g0bledyg00k wrote: ↑
11 months ago
Never making a single investment again until I 100% know it pays off.

Got a lvl 36 (4 bars from 37) shaman that is about to become elemental at 40. Also considering rolling a hunter alt for the nostalgia (played hunter exclusively in vanilla). I do have a 2 month old baby to take care of after I come home after a full time job though so I can play 4-5 hrs a week mostly which is fine, I'm still enjoying the game. Can't wait until 60 though to gank endlessly, and hopefully enter a raid. We are also currently looking for a house to move so that takes up some of my evenings as well. Oh and I forgot to mention I'm considering reschooling myself and changing my branch to become an electrician. I'm currently a "House technician" which is basically a Janitor but I also do IT, Sprinkler systems/fire protection and Ventilation.

Lots of things going on in my life at the moment!

Also got MC tomorrow. Gonna attend and hope i get some gear, or just DKP. Will be away from home though and playing on a potato so not sure how viable raiding really is.

Just hit level 40 on my druid. Really looking forward to the rest of the journey to 60!

Hit 50 yesterday on my warlock, hoping for 51 this week.. Been spending some time fooling around on low lvl alts and on my bank setting things up for the future.

The grind from 50 - 60 is funny, max level is getting closer yet things still seem so far away! And I had a mental break down yesterday regarding my 100 % mount, so I have started buying mats and hoping that my guildies will save their summoning items for when I finally hit 60 and lend a hand.. Kinda wanna save the 250g !

I keep picking good times to leave town. I went on a 4x4 trip a few weekends ago and missed the DDoS attacks. This week and weekend I'm out of town for work, and thought I was missing out on that there levelling time.

The power utility decided to shut down electrical service to large chunks of the SF bay area for the next 5 days. My house doesn't have any power until Monday. I'm not missing shit by being out of town

Quite a bit behind the curve (dad life) but finally 40 and was able to purchase mount right away thanks to some Arathi and Badlands elemental farming:

Next stop some much needed love for professions at 42..

I hit 30 today with my hunter. So far, I'm really enjoying Classic, much more than I expected. I am a slow leveler, but it doesn't bother me much, I almost don't even look at my XP bar (for now). I want to see 60, but I will probably freeze my account since I have to focus on my thesis.

Hit 51 this morning grinding mobs in the Slag Pit. Really feeling like the impossible queue times (4000+ on Gehennas every single night) are getting to me, as I like going to the gym after work and then play for a few hours before going to bed. Been told to just weather it out and that it will get better soon. It is, however, really annoying to have to plan my sessions several hours in advance. Especially on weekends.

disco wrote: ↑
1 year ago
Hit 51 this morning grinding mobs in the Slag Pit. Really feeling like the impossible queue times (4000+ on Gehennas every single night) are getting to me, as I like going to the gym after work and then play for a few hours before going to bed. Been told to just weather it out and that it will get better soon. It is, however, really annoying to have to plan my sessions several hours in advance. Especially on weekends.

I do use TeamViewer but still feeling like it's a bit of a hassle. Feels like there's a sweet spot logging on between 16:30-18:00 where you never know if you're getting a 25min queue and won't have time to get home or you get a 3,5 hour queue and would be lucky to get to play before it's time for bed. Really annoying when I'm at the gym on my way home from work and have to run over to the area that has signal only to jump with my character every 15 minutes.

I'm on gehennas too. I usually get out of work at 6:00 - 6:15PM, get home 6.30 and get between 1,5 - 3 hours queue.. It's starting to get really annoying.
Worst thing: the place I'm currently staying has no internet connection, I use my mobile hotspot to play. This means I cannot log with teamviever or other stuff. If I get to play before 8 I'm lucky.
I noticed that getting into queue at 6.00 or 6.30 has a huge difference in wait time.

Queues time wemt down quite a bit in the first month, but actually got worst in the last few days.

So...my rl friend joined the game and I created an undead rogue to play with him...why...

Might be because I have great weapons bought with the money from my main, which kills everything in seconds, might be because I don't need to drink for mana every 4/5 mobs, or probably the class perks of true cc and knowing i can't heal myself with a spell that adds excitement to the gameplay..

I was going on and on between elemental and enhancement never finding my pace but kept going because I really need to hit 60, only to find myself standing still with no will to play because I always felt like I'm doing something wrong.

In classic feels very frustrating to change class, I started as alliance just to change things a bit and it didn't work, already felt behind, glad I found out I wasn't, now changing again I feel like legsweeping myself, but having a focused class felt so refreshing after playing hybrids that I'm honestly considering leaving my shaman as it is and go on with the rogue, and I'll have a friend to play as I level which is also great.

Why I love questing in Un'Goro:

Going well, enjoying it thoroughly still and now getting into the higher zones/dungeons which is great.

Time to level my lock now so I can actually grind shit lol.

<Goblin Rocket Fuel Rats> | Arugal Horde
Powered by https://classic.wowhead.com/item=9061/g ... ocket-fuel, our Fuel Rats go above and beyond to help out others.
Will you answer the call?
Guild Info ~ Stories ~ Discord
Similar topics
to 'Your progress'
Posts ViewsLast post