Am I the only one unable to play anything else but a Blood Elf?

Am I the only one unable to play anything else but a Blood Elf?

Linguine wrote: ↑
1 year ago
The lore was heading a different direction before they forcibly steered it the way Blizzard wanted so that they could add Paladins and a pretty race to Horde and Shaman to Alliance with pseudo-demons.

The way I heard it, Blizz was originally planning on Pandas for both factions in TBC, but the Chinese government (who had initially ok'd this) said no fairly last-minute. What, in that case, they planned to do about the paladin/ shaman balancing issue and underpopulated horde I don't know.

@OP, it was a sad day when horde got belfs.

I'll just point to this post when it comes to belfs and Alliance: (x) 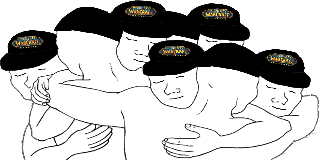 Krunk wrote: ↑
1 year ago
I'll just point to this post when it comes to belfs and Alliance: (x)

The lore for why High Elves would remain unplayable in WoW and remain a neutral faction is solid (except that it's doubtful that the lore he lists is around at that time, but even if it wasn't it could be explained that losing Silvermoon weakened them to a point where they don't fight yada yada yada), and a good choice, but everything about every high elf suddenly becoming a Blood Elf for TBC (when they were evidently not at the end of TFT and during Classic), and neglecting to emphasize why they hated the Horde and instead downplay it is shallowly written in an attempt to bend things.

They finangled everything to get the Lore where they wanted for gameplay purposes instead of writing a solid story and disregarded or wrote around everything prior instead of building on it. As you can see, almost everything here is new lore, not existing at the time of Classic or TBC, and without proper references I'm not even certain that the "old" lore was around at that time or added in later to better explain things (he references Chronicles, which is new).

WoW is a terrible story vehicle compared to the campaigns of TFT, but it doesn't help that the story itself has taken a back seat to getting more iconic heroes and villains as raid bosses or more playable races without introducing a new faction.

Don't get me wrong, I love blood elves, but it shouldn't be a dealbreaker. If you're a roleplayer, you could always roll a night elf with lighter skin and put in your TRP that you're a high/blood elf (before they joined the Horde so Alliance makes sense). You just won't get to see Eversong Woods or Silvermoon. Hopefully, Blizzard releases TBC Classic. Their skeleton and animations are practically the same as night elves in vanilla.

I think Tauren Druids are the best replacement for Blood Elves. If you play a Tauren Druid your magic cravings will be sated by nature. Here is how:

I remember when WC3 first came out. Night Elves were my favourite race because I have a love for anything that is nature loving. Tauren also kinda fell in there, but Night Elf more, because their entire race faction was all about there, whereas Tauren were just like... 2 units and 1 hero with Orcs.

Then TFT came out and Blood Elves were the focal point of the human campaign. God damn. That did it for me. Their story and plight and treatment by the humans made them such a sympathetic race for me.

When TBC came out I dropped my tauren, rolled a blood elf paladin. I will say, I'm going to miss the blood elves in WoW for sure, but part of me is a little glad they aren't coming back because blood elves shouldn't be the most populated race horde side. And I know that isn't the races fault and more so the playerbase, but still... doesn't seem right when a dying race is super overpopulated COUGHCOUGH UNDEAD COUGHCOUGH

I like belfs because they can be Paladins but Nelfs are totally superior :)

Also, can I have a death knight while we're at it? The Lich King came early this time :)

well i mean, as Blood Knight Antari puts it...

i feel ya though, i find the aesthetic of blood elf cities and buildings so be really alluring, high fantasy. would be a nice life living there as one

Well, only 2 more years for you.

A bat in the hand is worth two in the belfry.
Similar topics
to 'Am I the only one unable to play anything else but a Blood Elf?'
Posts ViewsLast post