TipsOut With the Hot Take

TipsOut With the Hot Take 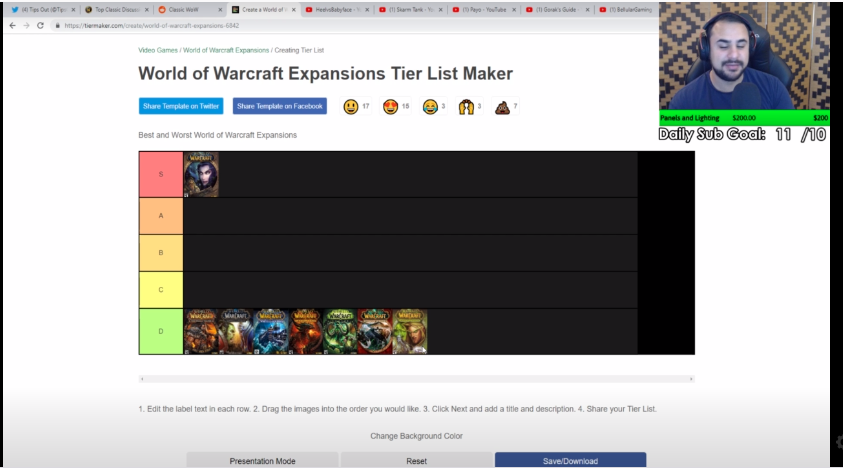 I'd put TBC and Wrath in C and call it a day.

I'll preface my ranking by saying I fully know I tier them different than most people.

I actually completely agree with your ranking. Very rare to find someone who will rank MoP high up, but I loved that expansion, minus the 13 month drought at the end.

For me I would just change TBC's and WotLK's places and it would be the same. :)

I'd include B: Cata, but that's a very preferential thing. I raid led during those times with 9 IRL friends so that alone is what made it enjoyable.

Wrath B tier and TBC and legion C tier imo.

Thinking about tier lists and wow is kinda strange for me. Cause some expansions I would rank as D or F actually had good content if I judged it as if it were it's own game. Like MoP - I give it a solid F. But the writing and design was actually quite good - it just had no business being a part of wow - complete distraction from the actual lore and ushered in the movement of WoW from a mature(ish) game to more a family friendly affair (<cough> kung fu panda). This was the expansion when animations and character designs started to look more pixar/dreamworks characters - which I felt was divergent from blizzards original stylized designs.

Same with Cataclysm. Some of my favorite art assets, zones, and designs were from cataclysm. But that expansion irreparablely destroyed the so much (unfortunately for the worse). And they turned all goblins into juice-heads from the jersey shore - one of the most annoying, cringey people sub cultures in the US (basically the city version of the worst type of redneck). So it gets a solid F from me.

I think the majority of my rating would be based on the changes made from the previous expansion and the evolution of the game. For this reason I'd actually rate MoP pretty high, because it pushed the game in the right direction from where it had been previously. Similarly I would rate Wotlk and Cata really low because they both ruined a lot of the game for me personally. Noticeable changes that impacted the game for me most?

BC: World PvP changed a lot in BC with flying mounts, raiding size was nerfed and an emphasis was placed on vendor based gear systems and catch up mechanics. Overall though, BC was pretty good, especially for PVE.

WotLK: Wrath destroyed world pvp with phasing quests and zones (in my opinion). It was the start of the end of seeing others out in the world. PVE started to add several variances of difficulty to raid content... You were no longer achieving something exclusive when you downed content. You were wearing the same gear as people in 10 man, 20 man, normal, heroic... It was all the same with minor stat changes. Down ranking spells was on its way out and most classes were confined to a simple priority rotation. Arena imbalances from BC were being addressed with a lot of balancing and was the gateway to complete class homogenization (which happened in Cata).

When looking at all the expansions together, Wrath was actually pretty decent. That is to say, if they came out with Classic Wrath, i'd be happy to play it! However, when considering the state of the game in BC and the changes that were made going into Wrath, WotLK really ruined a lot of the game for me personally.

For this reason I would rate the expansions themselves like this...

S: Vanilla
A: BC
B: MoP
C: WotLK
D: Cata (the only reason this isnt E tier is because with class homogenization, came the most compelling arena play we have ever seen)
E: WoD, BFA, Legion

Just to reiterate, this is list is based on the evolution of the game and how it affected overall quality. I would still prefer to play WotLK over MoP.

The only modern expansion that had any meaningful change to restore some semblance of quality to the game was MoP. Was WoD my least favorite xpac because we all sat in garrisons? Yeah. But I didnt see any changes in Legion or BFA that significantly changed the quality of the game and so for that reason I put them all together.

I'd include B: Cata, but that's a very preferential thing. I raid led during those times with 9 IRL friends so that alone is what made it enjoyable.

Firelands is enough for me to put it in the B category, it was such an enjoyable and fun raid, but maybe it's also my bias since I had a similar situation as yours. And the pvp was quite fun too.

in my perfect world the timeline would have gone that: Vanilla>Wrath>tbc>legion

You can add Mop anywhere in between as a filler addon. I am mostly speaking lorewise here so.

One of my favourite expansions is Mists of Pandaria as well. (Without Garrosh) What made it different was the Storytelling with Lorewalker Cho going with you everywhere and telling you everyone and everything in Pandaria. I loved the maps and the soundtrack and stuff. :)