"I do not serve the Light. The Light serves me."

I'm lazuriz i started playing wow when i was a youngster during Wrath i played a deathknight named Ailada i fondly remeber the talent trees and enjoying the game with my guild Defenders of the alliance ( yeah i only figured out it was DoTA when i tried to reconnect with them haha ).

I am intending on playing fury warrior and a priest in Classic wow and if im feeling adventurous at the time maybe rouge or frost mage.

Hopefully the games experience is just as i remeber in wrath meaning that there will be people all over the place at all levels doing all sorts of stuff and random acts of kindness from opponents and devastating betrayals from the same opponents. :)

Hard like Heroic More than you can handle
>>>>https://www.youtube.com/watch?v=9KEK3wfn2hw <<<<
Not spoopy i swear 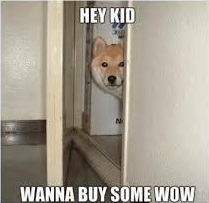 Jach the last battlemage here. been playing since launch and am stoked to see WoW Classic be released here in 2 months(ish).

Definitely looking forward to world pvp and (at least) mages being viable again. They do dps now... but thats about it.... and most aren't very good at it.

When in doubt, kill it with napalm.... "lots and lots of napalm."

Super keen for Classic's launch, preparing myself for the Warrior grind.
Been playing on and off since the early days and ready to jump back into the fray
I hail from Australia, fingers crossed the God of Ping treats me well.

Nice to meet everyone

Disto wrote: ↑
1 year ago
I hail from Australia, fingers crossed the God of Ping treats me well.

I would like to think the Oceanic servers will be localised (probably in Sydney?) like retail servers, so we should have nice ping. I was doing some PvP yesterday on a pserver with 350ms ping (just like the old days!) and it sucked ass and was a huge disadvantage for stuns/interrupts/positional abilities. I'm going to be pretty pissed off if they don't have localised servers for us.

I've been playing on and off since the beta for vanilla, so I'm super excited for the launch of Classic! I'm a Brit living in Sweden, and was lucky enough to randomly get access to the Beta.

Have been playing quite a lot, but have two kids nowadays so it's not as no-life as it would have been before

Anyway, seems like a great community here, so excited to join!

Hi everyone! I'm from the UK, been playing WoW since late TBC, once MoP hit I kinda lost interest. Been off and on with it since then, as my friends stopped playing and it became so hard to make new friends in-game. Really excited to get into classic, so excited in fact that I've started a character on Silver Hand to get back into the vanilla swing!!

Anyone going to be playing classic on an EU server and want to join up for RP/PVE/PVP? Let's talk!

Cersei wrote: ↑
1 year ago
Hi everyone! I'm from the UK, been playing WoW since late TBC, once MoP hit I kinda lost interest. Been off and on with it since then, as my friends stopped playing and it became so hard to make new friends in-game. Really excited to get into classic, so excited in fact that I've started a character on Silver Hand to get back into the vanilla swing!!

Hey Cersei, from the UK too (fair few of us here). Greetings!

Sup y'all! I'm from Australia but currently live in Canada.

Played retail from '06 and quit before MoP hit. I originally leveled a Human Paladin, then a Blood Elf Mage and finally a Worgan Priest. Have played many video games since then but SWTOR was the only MMO I've played consistently after quiting WoW. Tried leveling on two private servers too but quit after both were shutdown and all progress was lost.

Very excited to resub and roll on Classic. Looking forward to making some new buddies online & this traditionally styled forum is giving me hope!

Well ironically enough when I lived in Australia I rolled on NA. But for classic I'm probably going to level my main on NA and an alt on Oceanic on Horde with some guys I game with on the weekends. Wbu?
Sandinio

Great forum! I'm happy to share my excitement about Classic.

I played mostly in Vanilla, progressed through MC to Naxx. This time I'm looking forward for more PvP.


See you in Crossroads
Sandinio

Well ironically enough when I lived in Australia I rolled on NA. But for classic I'm probably going to level my main on NA and an alt on Oceanic on Horde with some guys I game with on the weekends. Wbu?

Yeh started NA Kil'Jaeden (no OCE on Vanilla launch) and moved over to Juebi'thos Day 1. Will definitely be rolling OCE this time around if it's available. The ping alone is reason enough for me, but the community is the most important.

Even if they release OCE down the track, I would re-roll there.

Hey all!
Super excited for Classic, been playing since TBC, took several breaks after Cata. Going to be playing PvP NA Horde!

Avivallday wrote: ↑
1 year ago
Hey all!
Super excited for Classic, been playing since TBC, took several breaks after Cata. Going to be playing PvP NA Horde!

I have been following this forum for a couple of months now and you guys definitely make long days of work easier !

I started playing in 2006 as a troll hunter/troll priest and stopped during WOTLK, I switched mainly to Dota then more casually to Hearthstone. Getting to experience the early days of Wow without being 12 this time is something I cannot wait to do ahah !
This time I'm rolling a dwarf holy paladin so I get to discover the Alliance side.

You guys have a great day !

Started in TBC and played through Cataclysm, Super excited to play Classic. Switching to alliance to play paladin althought i played Horde for all of my time in retail

Just found this place. Slowly getting my real life stuff in order so I can get sucked back into no-lifing classic. Can't wait!

Hello everyone, I've just joined so I will tell a little bit about myself (in terms of WoW for now :)

I've first time entered WoW back in 2008, kids from my village found this 'new game' and showed me. This was a pirate server, it had one realm which supported both Vanilla and TBC clients, we called those 'the red snake ' & 'the green dragon' things. We could barely read in English that time, but we still had a lot of fun. Everyone from my street played for Alliance, I really hated that, since WC3 I loved Horde. So I created Undead warlock and started my way trough (though I only reached lvl 14 and had to create another char, Alliance this time just to have ability to play with my friends). I can clearly remember running around Stormwind and begging for mount (took me couple of months to get those 600 gold). I remember this crazy feeling where we first found TBC client and I've created a Blood Elf, it felt so cool. Soon enough we found a FUN server, where all the custom stuff was going on. Then another blizzlike, and another fun and so on and so on we played for years and we were getting better at it :) Then I left WoW, found another interesting things to do in life, and had a long break. When I returned, I was already having a job so I could afford to play on official servers, so I did that. It was Wrath of the Lich King expansion at the very end of it's life at that time. I was missing the so dear TBC a lot, I hated that snowy thing, really. But the Cata came and made it even worse. So I left playing again, for a long long time. I renewed my subscription a month ago and really enjoyed playing Legion quests, reminds me of TBC and all those Illidan interactions awww (he's my fav from WC3). Then I found that WoW Classic is a thing and was like HOLY $#!T. So I wrote to my childhood friends and we're waiting for the thing to begin (I hope they're not going to choose Alliance again :)

I see a lot of info on this site, and people with a lot of knowledge in the game and I had forgotten a lot already and had not too much of it since I was a child when we were playing Vanilla/TBC. What would be the good point to start gaining some knowledge?

Really happy to find to this place!

I've only played classic on private servers (which are obviously not accurate to the original) and I joined the game back in TBC so I've never had the opportunity to play the original game. I'm really excited to finally play classic for real in August.

I'm preparing myself to be addicted to WoW once again :D

gorda.the.spy wrote: ↑
1 year ago
What would be the good point to start gaining some knowledge?

Welcome! If you're looking for a good place to find information, then check out the guides section! index.php?f=7

Been an avid reddit viewer of Classic, Play WOW back in the day '05 EU Aggramar Server, Boys From The Horde, Mained a Undead Rogue raided up to AQ40, had a Shaman Alt in 0.5 too.

Moved to Maining Shaman during tbc owing to feeling under valued on my rogue and the change to 10 Man Kara / 25 Man Raiding, hit our guild pretty hard, moved around alot with a few friends, creating a small 10 man raiding guild on WOTLK which went went. But then hit casual mode with RL etc. only ended coming back for a few months on each Xpan to play the story as I love the Lore even though the writing might be slightly lacking of late since MoP imo.

Defiantly coming back to classic! Struggling to pick a class though; rogue / shaman / Priest / Mage I've narrowed it down to on private servers, but yet to make a decision.

Stumbled upon this forum site looking for info on the whole "Chose your name before actual release".

Decided to join and see what goes on.

A lil introduction, began playing 2006 but being a lil kiddo and english not being native tongue had a pretty hard time actually questing. I remember asking my parents to translate but I soon got tired of that and pretty much just spent my time killing and being killed by whatever mob i walked into. Literally had no idea of what to do, never played a MMO until WoW, pretty much only Legend of Zelda games before as well as BF2:MC for the PS2 which was a blast.

With my english becomming better and actually understanding whole sentences I started to level up alot quicker. By this time TBC had been release and I did not know that Wotlk was just around the corner, because when I hit lvl 70 and was ecstatic, lich king released mere 12 hours later and yeah, I was a bit slow to level up after that.

Will look through the forum now, take care!

Well, except for jumping on the free version to somewhat re-acclimate myself to the game, I haven't played in 9 years because the game was not fun anymore. I quickly learned on that short little free version, why I left the game. Praise the Lord Blizzard is releasing classic WOW so I can be a noob all over again n a game that is interesting and fun to play.