Let's get some positivism back on the front page of this forum!

What's the best/funniest/most interesting interaction you've had with a random player so far?

Mine has to be joining up with a Shammy in Stonetalon and doing the paint-dry slow escort quest with that tauren called Kaya. We ended up just railing at this poor cow as she trundles along - really going for it with /emotes and some pretty imaginative language. Was funny as fuck and eventually stuck with the guy for a few other quests afterwards. Bless you Harrto if you're out there reading this

Also getting help from guild mates even when there's absolutely no reward in it for them either. I had to drop that level 27 Isha Nawak creature at the end of the long barrens quest chain and after asking in /g immediately had 3 people offer to help who had done it already.

I think my best interactions as of late have been unwavering praise by struggling mages in lower barrens by healing and tanking for them while letting them get all the mob tags.

Rad night elf rogue teaming up with me to complete a quest, discovering I was on a part of it he'd already done, and stayed to help me out anyway. Then we stuck together for a while doing other quests.

Had a lot of fun with a random group of people who I met in wetlands for the elite quests. We carried it on all the way to stockades and cleared stocks twice to ensure everyone is done with their quests. Ended with everyone adding each other and us still regularly doing dungeons together! 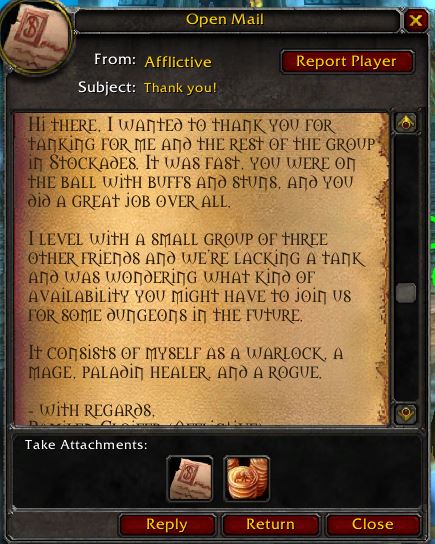 I ganked a guy a handful of times. He wised up and swapped layers. I played the layer lotto and hit him again!!!! Was my favorite player interaction so far.

g0bledyg00k wrote: ↑
1 month ago
Never making a single investment again until I 100% know it pays off.

So I was doing the chain for the Ring of Stormwind and got to the last part where you have to kill the corrupt lord in the castle gardens. When I walked into the room where the battle takes place, there were two level 5 characters sitting on one of the park benches role playing as spectators there to watch people kill the corrupt lord. They were hilarious, were just talking to each other about the tickets they bought to get those seats, bantering about the players they were watching, it was awesome.

I also met a nelf named Beggar on random trail in Darkshore who was begging passersby for buffs. As I play a hunter, I had no buffs to give, so I gave him a /cheer and told him "it's a buff for your morale". He used a custom emote to "steal 11 silver and 49 copper from you" and ran away into the woods.

I love playing on an rppvp server.

The faction war has also been ruthless as I'm sure it is on all servers right now. We had roaming death squads from both factions all over Ashenvale.

Yeah the faction war on Deviate Delight is getting heated. Naturally Grob doesn't send its best so we went from a time to peace to some firefights happening here and there.

Some level 10 rogue went up to me in Undercity and /begged for money for a new sword. I asked her if she had anything for sale and she offered me some "awesome linen bandages!" Bought them off her for 10s and she told me me I was her favorite cow. Good deal.

Another time I was heading to swamp of sorrows when someone in STV general called for help at the Nessingwary camp. Showed up to find a group of 6 Alliance ganging up on people and slaughtered them all. The last one was a hunter that tried to play dead so I punched her and /no then /pointed at Nessingwary. They must have told the rest of the Alliance because they all revived up and quietly turned in their quests along with the Horde while I stood watch. Not a single person attacked anyone as long as I stood there. It was beautiful.

Lendryn wrote: ↑
4 months ago
Another time I was heading to swamp of sorrows when someone in STV general called for help at the Nessingwary camp. Showed up to find a group of 6 Alliance ganging up on people and slaughtered them all. The last one was a hunter that tried to play dead so I punched her and /no then /pointed at Nessingwary. They must have told the rest of the Alliance because they all revived up and quietly turned in their quests along with the Horde while I stood watch. Not a single person attacked anyone as long as I stood there. It was beautiful.

I wasn't flexing or anything, obviously I had them heavily out-leveled and it wasn't fair at all. Point was just how abruptly it turned from a typical STV bloodbath to something very civil.

Sorry it came off that way.

Nothing to apologize for, lol. Just giving you some shit. 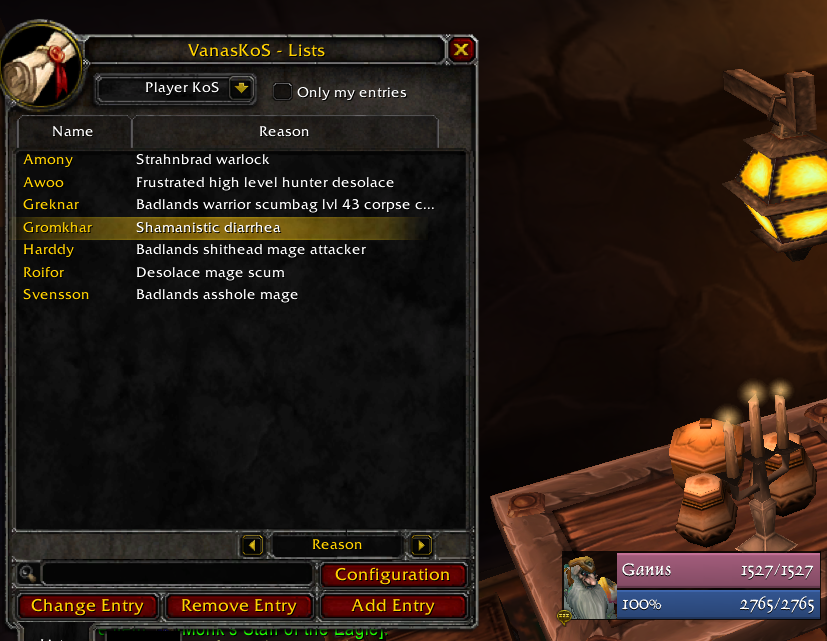 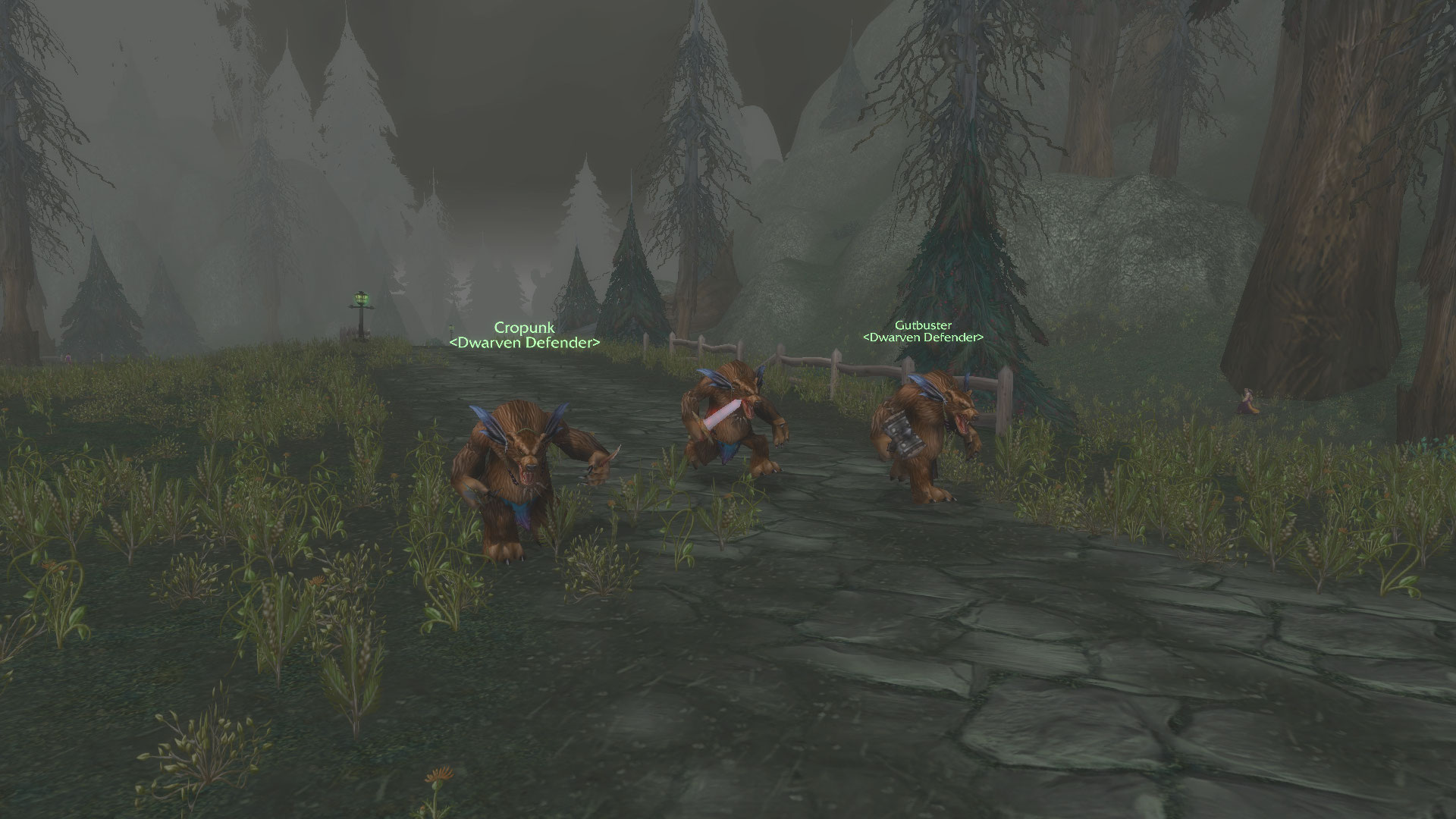 I think I made this guy a little nervous 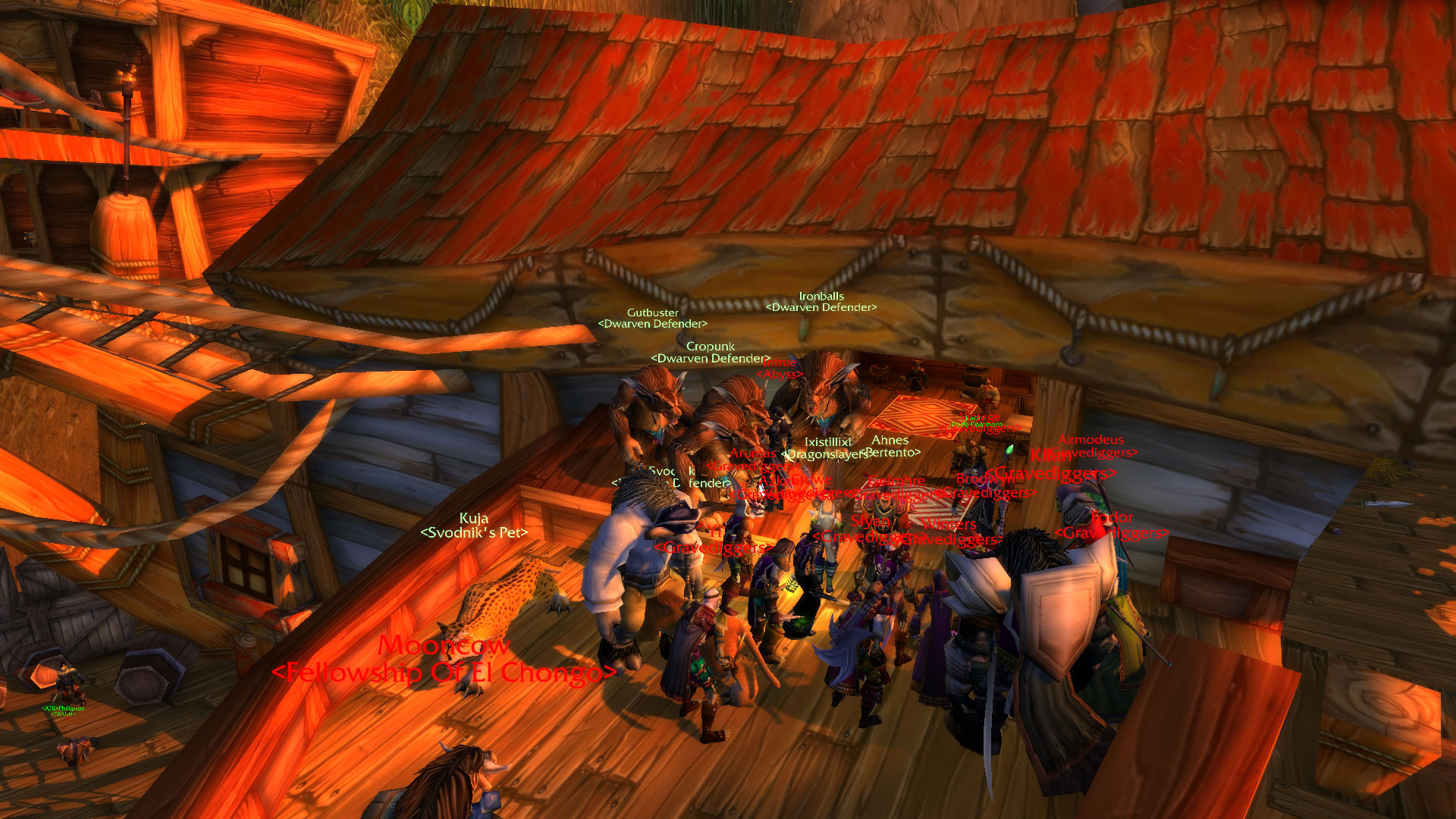 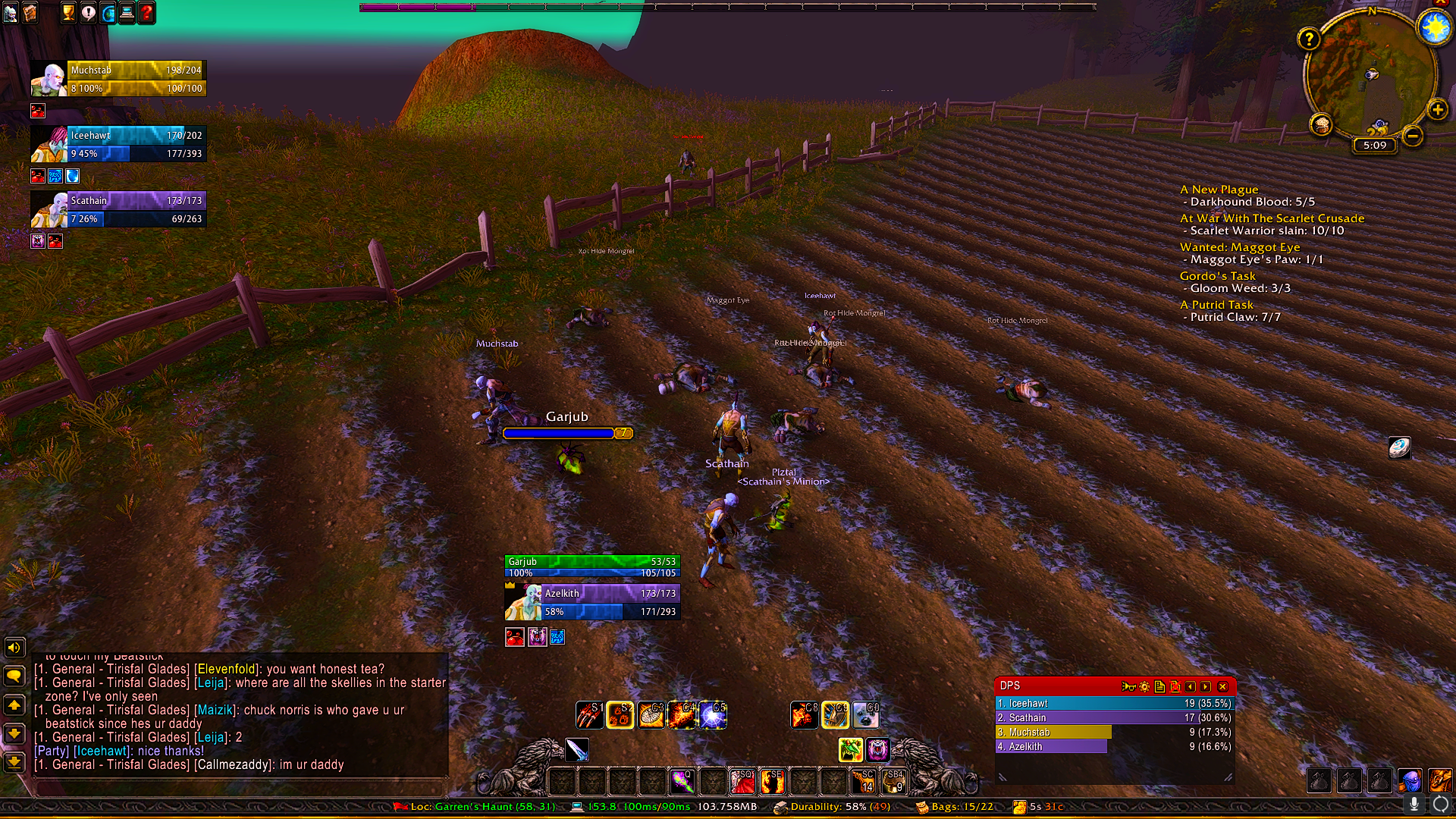 Partying up with randos just to kill a mob for a quest. So much fun. You can just solo this in BFA..no point in doing that. lol

I love seeing little cultural habits: take for instance this dwarf on his way in metro station to Ironforge, complaining about recent crime rates, suspecting gnomes being at fault. The guy added, maybe they should wall up those pesky gnomes.

And no, I'm not being political IRL, I loved the in-game flavour of it, meeting grumpy dwarves saying such things. Not all RP characters need to be 'nice'. In fact, having cold-hearted characters on a server gives so much flavour.

(Also, I can imagine many dwarves being kinda dwarf-centered folk.)

My first ever PvP encounter in Classic was in northern Ashenvale at level 20 (near Maestra's Post). A level 24 Shaman tried to gank me, but ended up running away with ghost wolf with less than 10% health. I had already used up Hammer of Justice mid-fight so I wasn't able to finish him off, but to be able to survive a gank attempt and almost turn it into a kill against someone 4 levels higher definitely gave me a sense of satisfaction.

I already posted the pics for this random encounter, but since I've included in the Adventures of Gallow thread with a mini-story, here it goes!

Right after our victory in Ragefire Chasm, I reported to Thunder Bluff about the eradication of the troggs, as well as the fate of Maur Grimtotem. The taurens were delighted to know about the news for troggs, however understandably upset about Maur.

The wind was blowing gently into the silent night. It was a good change of temperature after the lava-filled cave, so I decided to just relax and simply fish. The sound of the bauble bouncing in the water was therapeutic.

There were others in the same area. A young tauren caught the corner of my eye, so I stroke up a conversation.

Mooller of the Tauren, was his name. We just stood side by side for a while, fishing blissfully. He then traded me a shield – out of the blue! It was even looking sturdier than what I was using, so I was grateful for this act of selfishness. I tried to give something back in return, but he was too kind to accept anything.

I then pondered about this random act of kindless. This is exactly the type of person our guild would need! So I asked him, whether he wanted to be a part of us and continue spreading the good vibe.

And that was that! With that, we had just received a new Adventurer. Mooller the Tauren. Welcome to the guild!

rijndael wrote: ↑
4 months ago
My first ever PvP encounter in Classic was in northern Ashenvale at level 20 (near Maestra's Post). A level 24 Shaman tried to gank me, but ended up running away with ghost wolf with less than 10% health. I had already used up Hammer of Justice mid-fight so I wasn't able to finish him off, but to be able to survive a gank attempt and almost turn it into a kill against someone 4 levels higher definitely gave me a sense of satisfaction.

I obviously kill any horde I see, and I had just killed three different hordies, who decided to band together and end my reign of terror. I popped cheetah, and kited them to Maestra's Post. As I ran in, two other allies saw my plight, jumped in, and we killed them all again. Good times.
Telvaine - Night Elf Hunter
Vennrick - Human Warrior
Keatts- Human Rogue

I started out on another server to play with a friend, as lvl 10 rogue, I met this mage I killed princess with, then I showed him where jasperlode was (apparently he was very new) . We talked a bit, about Lineage 2, and that he actually had a lvl 44, and then he said he'd send me some bags. After dinner I saw two 8 slot bags in my mail.

That made me a very happy, as a former bag-starved rogue. I felt like a millionaire, and all that pain getting to 10 as rogue was gone.

I had a very nice encounter with two Alliance guys, a Warrior and a Mage. I was soloing Overseer Maltorius which is actually pretty hard (he has WAY more HP than a normal elite of that level). They came by and watched me go at it, and decided to help me out in killing him, instead of ganking me and taking it for themselves.
Also made two very cool friends by doing the Jintha'Alor quests with them. Later I did Maraudon with them as well and we will do more dungeons together.

The first wpvp raid with Kor Kron of course! Too bad layering fucked it up, but we did a grand tour through duskwood and redridge even though most were unmounted and at lvl20-30.

Was alot of fun and a good testrun, once people can't hide in layers anymore they will be in for some pain :D

my Guide to Dungeon grouping and playing

For the most part I like the random party-ups with people and the conversations that evolve from that. I usually add every person that I level with for a few quests because they're cool and would like to do together dungeons or raids in the future. Sometimes these people go out of their way to help me finish a quest and now I do the same for others.

I was levelling a druid alt on a new server to catch up with friends, I went to Westfall at 12 and was having a hard-time with it, when I bump into this Dwarf warrior, we grouped up to finish a quest and after being done I just suggested I could tag along with him and be his pocket healer, so we ended up spending all afternoon clearing both our quest logs and chatting away.

And I'm having loads of these interactions, just yesterday a fellow Horde Shaman stuck around, without needing to, until I was finished with one of those terrible-drop-rate quests, similarly the night before a Priest bumped into me doing Beren's Peril, grouped up since he was having difficulties on that one, and ended up doing A Husband's Revenge and The Weaver.

The world feels alive, and kicking!