Blizzard EntertainmentAs of now, a large number of WoW Classic characters have been created on the following realms. Players with characters on this realm are likely to experience severe queues at release.


We have updated the algorithm for the realm population tags so they more accurately reflect the expected population for that realm. The realms that are listed as “Full” are where we expect to see extended queues. If you’re concerned about long queue times affecting your play experience, you may want to consider creating characters on a lower population realm before the game releases on August 26 at 3:00 p.m. PDT.


We suggest that players, especially those on the Herod realm, consider creating characters on Stalagg. We expect that other PvP realms in this region will otherwise experience significant login queues when Classic launches.

STALAGG IS BACK ON THE MENU BOIS! Some of the guys from my discord were wishing Stalagg would be up for launch

Yes! More players! Blizzard claimed we all didn't...but we DID!!

Important to note that while Whitemane is full, Fairbanks is only medium and as such I do not believe we will be receiving a new PST realm until that fills.

Thalnos and Faerlina are both "High" on pop and Blizzard seems concerned they'll reach Herod's point.

This is great news! More realms to spread out the player base because Herod was gonna suffer big time on launch day.

EDIT: Yeah, I'm bummed about Whitemane... it doesn't look like anyone is wanting to go Fairbanks. =/

Linguine wrote: ↑
5 months ago
Important to note that while Whitemane is full, Fairbanks is only medium and as such I do not believe we will be receiving a new PST realm until that fills.

Thalnos and Faerlina are both "High" on pop and Blizzard seems concerned they'll reach Herod's point. 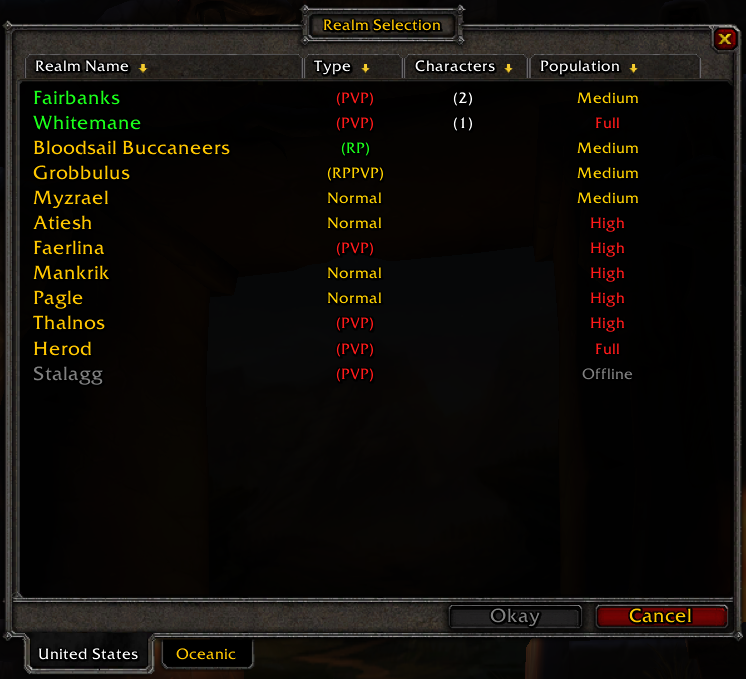 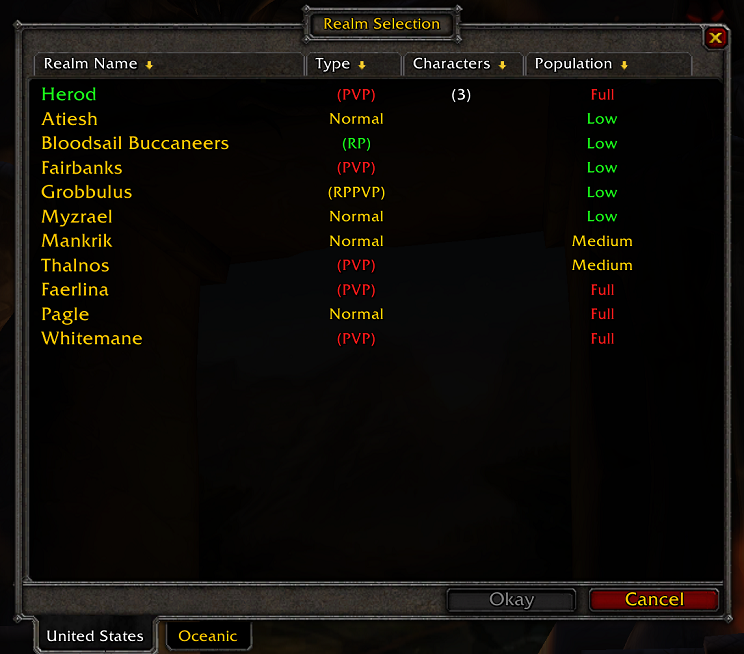 That's a pretty big change in less than a day. I smell a couple new servers opening up in North America before launch.

Druidik wrote: ↑
5 months ago
I'm bummed about Whitemane... it doesn't look like anyone is wanting to go Fairbanks. =/

There was a thread talking about this last night - at first glance you would think you want to be a on a high population server. However, it looks like these servers are going to be fucking enormous - maybe 10-20x the populations of the original vanilla servers. We're talking so many players that it's impossible for them all to exist on a single flat server. And this is why there is layering going on to keep all these players from blanketing every zone and capital city, which would render the game unplayable. The idea is that eventually enough people will stop playing that Blizzard will be able to turn off layering and squish all the players down onto a single flat server. But if you got like 10x too many players still active 2 months into the game... Blizzard won't be able to just say 'well we promised no layering by now, have fun with 40,000 players on a flat server'.

I'm on Whitemane..for now. I understand it's full but I have faith..if queue times are too long then I'm moving to Fairbanks OR Stalagg

They should add another PvP choice for PST players.

They should add another PvP choice for PST players.

Fairbanks is only Medium. The EST servers were all Full or High before they added another. If they're going to add another they'll wait until Fairbanks is at least High.

Druidik wrote: ↑
5 months ago
I'm bummed about Whitemane... it doesn't look like anyone is wanting to go Fairbanks. =/

But if you got like 10x too many players still active 2 months into the game... Blizzard won't be able to just say 'well we promised no layering by now, have fun with 40,000 players on a flat server'.

I think you hit it on the head Pippina. Kinda worrisome to be honest!

Druidik wrote: ↑
5 months ago
I think you hit it on the head Pippina. Kinda worrisome to be honest!

Don't worry about it too much. The server capacities were planned in advance, so it's not like calling a realm full is a manual process. There won't be a 'oops we weren't paying attention and now there's too many damn people on this server' situation. So whatever the population numbers are, a full server is still full to Blizzard's server gameplan. They're going to cap it at whatever number they planned for. The only variable to their capacity planning would be player retention - how fast will the population decline as people stop playing. The exact date for layering to be removed on any given server has to be a function of population, not a fixed date.

But regardless, a smaller server will still reach single-layer numbers sooner than a maxed out full server. So yeah, I'm happier to be on a lower population server right now. Less chance of queues, higher probability of getting to a single layer sooner. 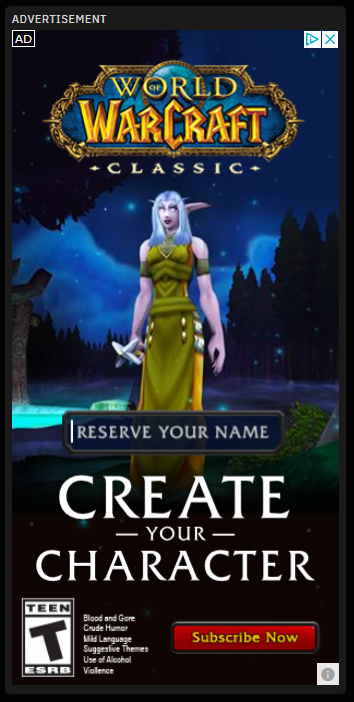 Secured my name on Stalagg, happy to have a back-up in case Herod really proves unplayable.

How can realms be full when literally nobody is on them yet?

My reputation is clean.

Black Monarch wrote: ↑
5 months ago
How can realms be full when literally nobody is on them yet?

This is my opinion. Blizz has idea of what they think their retention rates will be. They are taking that number and determining how many layers they will want to launch with. Based on the quantity of unique accounts that are creating characters on a given server they are showing you the capacity that the server has given the amount of layers they intend to launch with.

Example. If Blizzard thinks that 20% of people who play Classic will stick around for phase 2, and if in phase 2 they decide they want a full pop server to be 10k, they would want to launch with approximately 50k players per server (approx 16-17 layers), with the expectation that these players will naturally decay to one cohesive world of 10k players by phase 2. So they mark servers full at 50k name reserves based on the amount of unique accounts that have created a character on that realm. This means that if you create 1 character or 3 on one realm, you are still only counted as 1 player towards that 50k population. If you create characters on multiple realms, you are counted towards each of those populations. Counting several characters on the same server would be useless as you can only be logged into 1 character, on one account at one time. However, they can not determine which character you will primarily play on if you create it on two separate servers, thus both of your characters are counted towards the realm population.

The issue is that we dont know how big servers are, we dont know what the cap on layers will be (there will be a cap), and we dont definitively know how many people will be on each layer (only an estimate). So the terms "low", "medium" and "full" are relative to what those numbers are. We have some general speculation based on the betas etc, but at this point I would avoid full pop realms at all costs given what we do know. It is very reasonable to assume that players on full pop servers could be waiting upwards of 5-8 hours on launch to get in. This issue could persist for days... weeks or even months.

Of note, the people who paid for access 1 month before the game to reserve names and those who lined up to reserve on day 1 will be far more inclined to play immediately on launch and stay online for extended periods of time. This is your VERY dedicated audience.

g0bledyg00k wrote: ↑
1 month ago
Never making a single investment again until I 100% know it pays off.

Activision/Blizzard didnt predict we wanted classic and created too little servers. I hope they release central and mountain time servers. Were not even 7 days from launch. Open more servers!!

I love that the Herod discord is adamant that they'll stay on the server despite the potential queue times, but knowing the modern gamer, they hate long queue times.

They will eventually admit defeat move to Stalagg :^)

Thanks for that, didn't realise a new server opened eu. Actually got my main name (Fanny) sorted now thanks to that!!