Classic will be my first time rolling Alliance and I will be opting for Human Paladin. For you old timers on Alliance side, is there anything I should know about the faction? Is there a Mankrik's Wife type quest? Is there a particular experience or quest chain that is quintessential in the Alliance leveling experience that I shouldn't miss out on?

Alliance has a lot of cool quests but one that instantly comes to my mind is Stalvan chain. Google it to know where to start, but don't spoil it for yourself. I would also recommend doing Duskwood quests as this is probably my favourite zone. If you will, there's another cool chain about hermin/Abercrombie. I also remember Onyxia preq was quite memorable.

Regarding tough spots.. I think murloc areas in Elwynn are annoying. Moonbrook in Westfall is crowded as well. However I can't really say if there's anything particularly difficult.

By the way, do you know of any memorable Horde chains?

Definitely do the Defias quest chain in Westfall. It's a neat story and you get a juicy blue item at the end.


Merode wrote: ↑
1 year ago
By the way, do you know of any memorable Horde chains?

To be honest the only chains that are fresh in my memory from Vanilla are Linken's Chain in Un'Goro and Fordring's Chain in EPL but those are Faction neutral.

I think the entire experience of questing in the Barrens is what stands out for me as a rite of passage for Horde. The frustration of searching for Mankrik's wife and spawning Verog the Dervish, the experience of summoning and killing Echeyakee and Ishamuhale, the relief after looting the Stolen Silver and that final feather off of those damn Raptors, and finally the pride of equipping your first dungeon blue after a full Wailing Caverns run.

And to top it all off, you're treated to the absolute best and worst experience you'll ever have with General Chat, ultimately inspiring a special someone to create a forum & community dedicated to Classic WoW named after that very same General Chat experience we all remember so fondly from those days.

I've only leveled Horde character to lvl 24 while waiting for official launch (tried several classes). If Barrens is good, then you'll be astonished by Alliance zones/quests. Quests are much more interesting and there's a lot of chains. Even devs admitted to that on Countdown to Classic. I think in general Alliance and Eastern Kingdoms were done first and there wasn't enough time to polish Horde and Kalimdor side of affairs.

Barrens is just so bland story and questwise compared to Duskwood or even Darkshore. 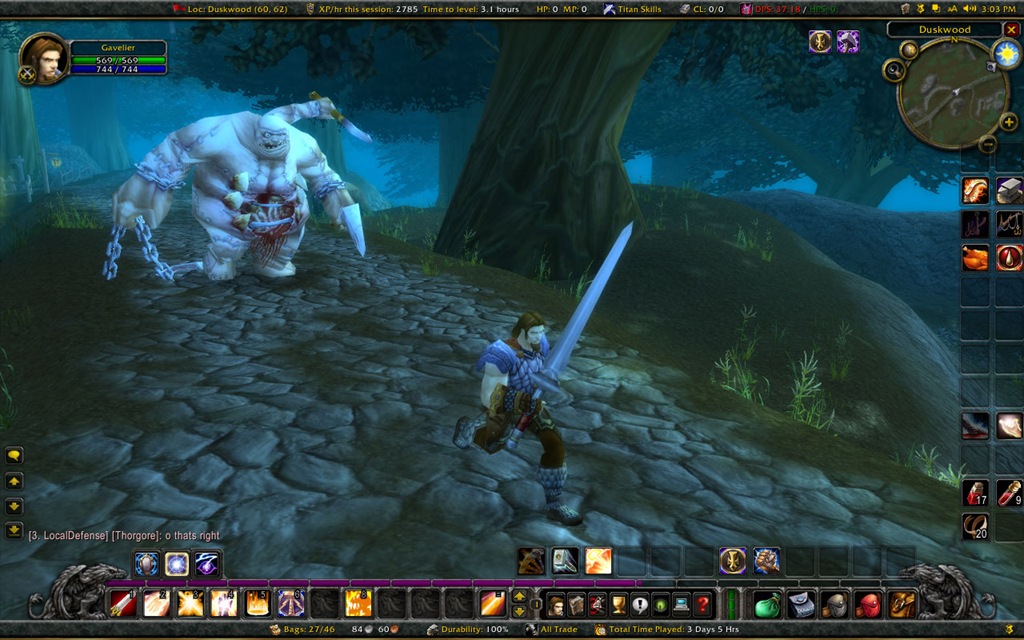 What a great zone. You're going to love it mate.

The defias quest chain (Ending in a boss awesome blue at level 18 that youll keep until level 40.
And of course the Stalvan Quest Chain.

The entire leveling experience for human is the best in the game IMO. So dont try to speed through it, take your time, turn the music on, and enjoy it. You can speed through 30-60 after your done with the first 4 zones or so.

Wetlands will be a must unless you plan on grinding, be ready for long quests with low drop rates!

Having done both horde and alliance I can tell you right off the bat Alliance leveling is far more enjoyable compared to Horde (In my opinion). I fully recommend the human starting zones for newer players to alliance as it's very compacted, travel time is minimal and I find it overall the most enjoyable zones. Elywnn Forest is a nice 1-11 zone, if you grind as you run from quest to quest you will get to 11 in no time. Westfall is a tiny bit grindy but you don't feel the pain at those early levels. As some have said the defias quest chain is a great chain and you will be rewarded greatly for completing it. Deadmines is also a great XP dungeon if you get all the quests. Once you complete all of that and maybe a little loch modan if you're short some, redridge/wetlands is the next stop for 18-25. Both zones are loaded with high XP quests with good pacing and elite quest XP. You will also pick up more dungeon quests for Stockades from these zones. (All stockade quests completed can give you a level and half almost). 25-30 is duskwood which is my favorite zone in the entire game. It's lore heavy, I love the atmosphere and since you're going to be playing paladin you get to enjoy those undead only spells like exorcism early on.

In short all the alliance zones are compact and the travel time is minimal compared to horde. (IE Barrens having you walk from one corner to the other. Going back and forth continents for Stonetalon/Hillsbrad, etc. Alliance Major cities are close by and have shorter flight times. Stormwind is very conveniently placed and not far away thus making trips to the city seem less of a drag).
Trust me, 1-30 in human zones will be a blast. I'm excited for you.

The longer I play Horde, the more I notice Alliance bias in vanilla. Thunder Bluff lacks iconic landmark or anything special compared to other cities (the great forge, the cathedral, the Mannoroth monument). In general Horde cities are smaller and lack something that would make them stand out. Alliance has Menethil, Theramore, Nethergarde and many more which are really cool and play into Alliance lore. Horde really has nothing iconic except for XR.

Even zones variety is poor on the Horde side. With Alliance you get: forest, farmlands, spooky dark forest, snowy mountains, green mountains, elf forest, spookier elf forest and so on. While on Horde side it's: spooky forest, spookier forest, wasteland, wasteland, wasteland and wasteland with rocky pillars. I mean, we knew from W3 Barrens is savannah, but they could easily tuck in something more varied than Stonetalon or 1k Needles. Other than Barrens, Ashenvale and Durotar we knew nothing about Kalindor before WoW.

Wow, and I consider Mulgore my favorite starting zone, though that's primarily due to music, ambience and nostalgia. I never thought too much about it from the questing locations and leveling efficiency standpoint.


Caspus wrote: ↑
1 year ago
25-30 is duskwood which is my favorite zone in the entire game. It's lore heavy, I love the atmosphere and since you're going to be playing paladin you get to enjoy those undead only spells like exorcism early on.

Everyone seems to love Duskwood. I can't wait!

Yeah really love the Alliance zones. Duskwood is a highlight but even Redridge or westfall are great. You always can kill something on you way to the quests and travel times are minimal. Stormwind is directly connected to IronForge so you can always switch zones if some quest are over crowed.