What is your overall favorite leveling zone?

What is your overall favorite leveling zone?

tbh I like me a little STV. brings back memories trying to quest there

I've always loved Ashenvale for a number of reasons. First off, I was a huge, huge WC3 fan, so seeing Ashenvale in WoW for the first time was just incredible to me. It really drove it all home that "holy crap I'm actually IN the WORLD of Warcraft. Second, the Aesthetic is really nice. Dark, NElf-y woods. The music is great. It's just really enjoyable to be in. Then, it's the first contested zone I encountered, which brought a whole new thrill with it.

Duskwood was and is still one of my favorite areas. Dark and spooky with true terror waiting just off the path. I also loved the prehistoric feel of Un'goro. I remember my first time crossing the desert of Tanaris and descending into Un'goro, as the mists overtook the clear skies I could hear Pterrodax cries.

I'd heard of Devilsaurs but was excited to see one myself. It saw me before I saw it...

I loved world PvP and that place was the place to go! No matter what level you were.
Endless upon endless battles.

Sorry for being generic but Elwynn Forest is definitely my #1 (in Vanilla WoW). This map always makes me feel like I'm in some kind of Amish town where I'm actually a part of the world. Dun Morogh comes close too. It was the first area I looked in to and I immediately fell in love with World of Warcraft wandering there as a tiny gnome.

Winterspring and Tanaris are some of my favorites. Hinterlands is another, love the awesome troll ruins there and mithril $_$.

Looking forward to living through them again!

For me it's definitely Un'Goro.
There are few things quite as satisfying as running around a zone and completing 14 quests at once for that huge turnin.

Rest are depressing as fudge, maybe it's because I'm a COW

Duskwood is the best. The atmosphere, the theme, and the quests are all quite good (with the exception of the travel from east/west repeatedly). It's a tremendous zone and I always do it.

After that there's a lot of pretty good zones, like Darkshore, Tanaris, Un'Goro, Hillsbrad/Alterac, and Feralas.

Razor wrote: ↑
1 year ago
Probably Ashenvale - the first serious clash with the opposing faction giving you a kick of adrenaline, great lore in terms of Warsong Gulch and of course, the soundtrack, to my mind the best in the game.


acrmojt wrote: ↑
1 year ago
I like 1k Needles. The feeling of being away from all civilization and just out in the burning sun in the wilds is cool.

Also, this. Moving to Thousand Needles always gave a feeling of actually "growing up", leaving the Barrens where you did spend most of your childhood and now moving to uncharted areas where you are on your own.

As horde I also love all the early Forsaken areas, don't know why, probably something about the tragedy of it all.
Telvaine - Night Elf Hunter
Vennrick - Human Warrior
Keatts- Human Rogue

I don't know guys how about you, but i find Darkshore (Classic and TBC) the most atmospheric and sorta "magic" location among the rest. Including everything: quests, music, ambient, creatures and cities. Maybe cuz it's the first dangerous location i'd made to back in the times. Maybe cuz myself is a kind of person who like to have some time being alone with myself and my thoughts, but this is my totem location. Do you hear those curious ambient sounds watching the image? Cuz i do.

P.S. Still i love every single location, but this one has its own zest. 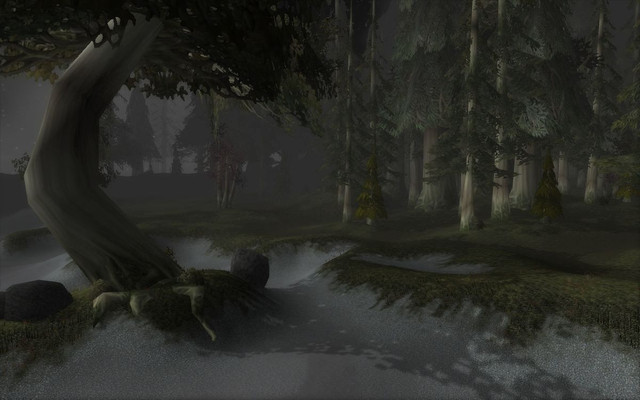 I've always had a soft spot for the starting zones. My overall favorite zones are Mulgore and Elwynn Forest by far! :)

I like Felwood and Winterspring, its two great zones and the road to 60 is almost over. I played Alliance in vanilla so Elwyn Forrest, Westfall, Redridge Mountains and Duskwood has a special feel for me. This time im going to play Horde and pay some new (hopefully) awesome zones.

Tirisfal Glades and Silverpine Forest, I enjoy the atmosphere of the Undead leveling zones a lot. Looking forward to giving Hillsbrad Foothills another try as well but it did not make as much of an impression on me as the zones that came before it.

It's gotta be Feralas. Exploring as a lvl 46 hunter and suddenly stumbling upon an elite dragon named Emeriss. Filled me with awe. Been fond of the place ever since

Ashenvale floats my warcraft boat. It just has a great feel to it!

Tirisfal Glades. I like the fast and easy leveling of the 1-10 zones, and the fact that the questing experience is self-contained. It doesn't have quests that send you to 3 other zones to start 3 new quest chains when you're not even done with the zone you're in. It doesn't have you bouncing between two quests hubs like Durotar and Elwyn Forest do, and it has better access to the faction capital than Mulgore and Teldrassil do. Many of the quests feel related to each other, like different steps in a cohesive campaign. And it has that dude on zombie island.

My reputation is clean.

Teldrassil is probably my favorite place to quest, it feels like home.

Westfall has big place in my heart too.

Redridge! I love the autumn theme of the zone, and the fact that it has a lot of different mobs and also contains my favorite hub, Lakeshire.

Hinterlands. I love its tranquility and the open-world "mini-dungeon" Jintha'alor stands out from other leveling zones.